Day Five and Callum and my last day of the half term holidays together and we had been invited for a Play Date. A perfect way to finish off our week. I always feel guilty that Callum doesn’t see more of his friends in his spare time and since starting work, there has been less time for play dates. It was going to be great for Callum to let off some energy with a friends! I’d actually hoped to see more of his friends over half term (and maybe mine too) but a week just isn’t enough!

Edward is a friend from Callum’s old nursery from before he started school. I hit it off quite quickly with his mum at kiddy birthday parties and then when we randomly bumped into each other in Asda (for some reason I seem to bump into everyone I know in Asda! Things have changed!) where we had another good natter. Unfortunately, Callum had to miss Edward’s birthday party because he was poorly so I had previously invited them over for a playdate at our house so Callum could give Edward his present. So this was to be our second playdate and George (Edward’s Mummy) had suggested Moors Valley Country Park and Forest.

If ever you are visiting down this way or if you live here and haven’t yet ventured, do check out this place it is great! The parking is a little pricey but George and Edward have the yearly parking permit (which is well worth getting). There are countless forest walks and activities to do on the walks, two great parks (one of them on sand), a lake and picnic area, a ride on train, fun activities in the school holidays, cycle hire, Go Ape for older/big kids, a cafe…the list goes on. I previously blogged about going there when they had the Gruffalo trail (it was The Stick Man this winter but I think it is about to finish this week). If going in school holidays I’d recommend going early as it gets busy quick!

George had kindly offered to drive us all so we took one car and because they had the yearly parking (it is done on number plate recognition – pretty cool!) so Callum and I walked to their house shortly after dropping Millie at nursery to get there for 9.30am where an eager Edward was already waiting in the car, excited to get on his way.

When we arrived, the car park was already pretty full and the park buzzing with activity. We headed to the parks first of all where they both heart-stoppingly showed us how well they could climb to the top of the Witches Hat! We then headed over to the little steam train station to buy our tickets for a ride on the train and we warmed up a little with some hot chocolate. After the train ride, it was back to the park for a bit before time for lunch!  By now it was time for lunch so we headed over to the cafe. After lunch we had a peak in the barn where they had some half term activities – face painting (which we didn’t do), a nature table full of animal skulls, hides, nests and other such stuff, colouring in table and a nature video. Following that, we went on a walk through the forest including the Tree Top Trail and a few of the wooden apparatus they have dotted around (as part of the Play Trail – we didn’t do it all, just the activities on the route we walked). 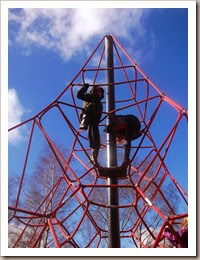 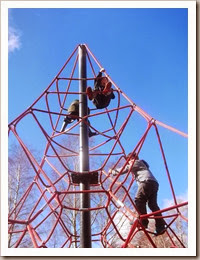 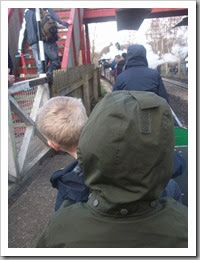 After all the rain we have had recently, we were prepared with wet weather gear and wellies and the boys, Edward especially, loved jumping in the muddy puddles and exploring the woody areas. Callum managed to fall splat in a number of muddy areas in true Callum style!

Edward was keen for Callum to see his bedroom so after our walk we thought it was a good time to head back to George and Edward’s house for a cup of tea while the boys played some more with Edward’s toys. Of course, Superhero dressing up was the favoured activity!

It was a lovely day – the boys got on really well and I felt like I had some mummy time getting to chat to George too. She is so easy to talk to! Will look forward to the next playdate!