Callum wets the bed. He is eight and I can probably count the number of dry nights he has had on my fingers. The medical term for this is Enuresis.

We have tried no pullups several times in the past but Callum has begged me to let him wear them again after waking up wet every morning for a week but the Dr explained that while he is in them he'll never be dry which is a fair point.

Going back to the appointment with the school nurse then.

She was lovely, straight away putting Callum at ease, reassuring him that he was doing nothing wrong and his situation was really common. She explained her son was the same and I could back it up with a couple of other examples of boys I knew who were 7 or 8 when they were finally dry.

We then had about 15 minutes when she found out I used to train her colleagues on the patient information system she was using and I ended up giving her a brief training session - lol. Then seeing how Callum was getting bored, attention was back on him.

She explained how his body was working and that there were a number of reasons why he could be wetting the bed and after asking him a load of questions it appears his body isn't producing a hormone that reduces his urine production at night, combined with his brain not telling his body to wake up when his bladder is full. Much of this we knew or suspected but she was very good at explaining it to Callum.

We have come away with updated rules (we got some from the Dr which are similar), a mat and an alarm. The mat is super sensitive and triggers the alarm at the mere hint of a drop of wee.

When the alarm sounds Callum has to pull out the cord that links the mat to the alarm, go to toilet and mop up mess, reattach the alarm then go back to sleep.

The theory is that at the start the alarm will wake him up after he has weed. Then as time goes on he'll wake up sooner and sooner until he wakes up without the alarm sounding. Body training.

The alarm is very sensitive though that it has gone off a couple of times unnecessarily.

Last night was his first night. Stuart and I didnt hear it but the alarm went off, Callum stopped it but forgot to plug it back in.

I may be mad but figure we may as well train Millie at the same time as she has had a few dry nights.

So you can picture our house in the morning having to wash 2 lots of bedding, including duvets, every day!

Hoping this will be a short phase and doesn't take the full four months that we have the alarm for but if it does it does and at least this time in 6 months it could all be sorted.

It's so hard as a parent not to beat yourself up. Maybe if I had made him not wear pullups sooner. Maybe we should never have have put him in them. But I just don't know whether it would have helped or whether I would have had 5 years of daily bed washes. There have been lots of 'my children were dry since...' comments too which are never helpful to another parent.

I can't change the past or the approach we have taken but at least we are now moving in the right direction towards being dry at night. Wish us luck.

Are a mum's school gate sobs a tool to make new friends?

Following my last post about Millie starting school, I'm starting to wonder if there's something wrong with me.

Overhearing the other mum's talking at school drop off yesterday they were discussing how they broke down at their last day of nursery and how emotional they are that their baby is starting school.

When I've mentioned to someone how, at 2 weeks after turning 4, Millie is too young to be starting school, they reply saying how tough it was to say goodbye to their little ones on their first day especially their first or others say especially their last and how they worried but they were fine and handled it better than their mummies. No, that's not it, I'm not worried about her and I always say she may be small but she is mighty! I wasn't sentimental about Callum starting, he was ready for it and there is no way I could put up with another morning arguing with Millie that she can't go to school yet she has to go to preschool like we've had regularly for the past 6 months. It is purely that, two weeks prior, she was 3 and that seems bloody young.

The only small waiver I've had was at a play date for Millie's class before they started. She appeared so much younger than her classmates, with her delayed speech and her small size and then at the end when she tried to say goodbye to someone she was blanked, even when I pointed it out to the girl in question she just looked at Millie blankly and went back to playing. At that point I was a little concerned but she is a tough cookie, there's no way she'll let anyone boss her about and she'll make damn sure they notice her and be her friend - I've seen it when she is around older kids.

It's just that I continue to look forward and don't like looking back.

Don't get me wrong, I have and I've felt melancholy about a lost friendship or what might have been if I took a different path but when it comes to my children I'm excited to see the person they are developing to be. I know who they are and their past but who will they become and how will this new chapter shape that?

Am I the only one? Do I have ice where a heart should be or am I missing a trick?

See I have another theory. Do mums (I say only mums as I've never known a dad to get soppy over their child growing up) use it as a way to bond and build rapport with other mums. They've heard other mums before them say it, they think it is the 'normal' mum thing to do which makes an impression on them (like the power of suggestion) so when it is time for a new chapter in their dear babies life they follow suit and and then it becomes a great tool for bonding with the other new mums in the playground.

Maybe that's where I'm going wrong and find it so hard to meet other school mums. Again I say mums, however, I've no problem meeting other dads but they have usually spied a fellow dad in the playground and joined them for solidarity in numbers against the masses. Surrounded by emotional women when they just want to get in there drop Harry off and get on with their day and if they get chance to share a raised eyebrow with a fellow dad all the better. I'm generalising but they definitely seem less bothered by the clucking and playground politics than us women!

Would love to hear your thoughts - how were you when you said goodbye to nursery and dropped your baby at school?
Posted by Unknown at 12:36 No comments:

Too cool for school 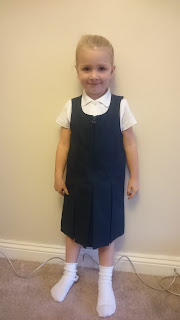 This week my youngest started school. Only two weeks earlier she turned 4 - it's madness. She is diddy anyway but seems so young and tiny compared to her classmates. However, she may be small but she is mighty! So when other mums are clutching at their hearts and fighting back the sobs as they say goodbye to their little ones at the school gates, I can't help thinking good luck to the school and do they know what they're in for? I know she'll be fine.

Millie went in for her first morning on Wednesday. Above is a photo of her looking all smart in her new uniform. Before we left she was covered in her breakfast.

The school is just a 15 minute scoot away so Millie scooted while I walked. Less than 5 minutes after we set off she lost control of her scooter and ended up with her white socks covered in mud! 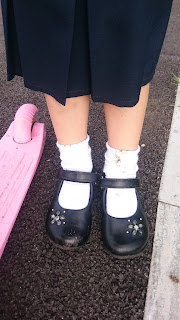 She confidently skipped up to the reception door and then said "can I get my teddy out now?" and then I realised my error of not checking her school bag before we left home! Apparently on their first day of school every girl needs a tiara, an Ana hair piece, a pink power ranger, a necklace, a magnetic drawing pad and a muslin. 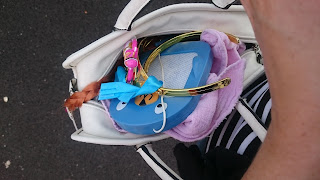 She was a little shy when she introduced herself to one of the staff who took her in to find her classroom but she was happy to go in with the other children without looking back.

Back home for me where I just about had enough time for a couple of tea then back a couple of hours later to collect her and meet with her teacher.

Apparently she took it all in her stride and confidently and has clearly already won over her teacher and teaching assistant who couldn't believe she can be a bit of a madam at home!

So first day (morning) at school was a success and was nice to know she was being looked after by an angel as we found a white feather as we left the school! 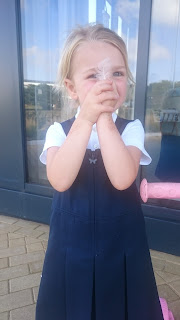