Here we are, day two of half term and I don’t think I’ve counted another grey hair! Whoop!

The plan today was to bake bread and see The Lego Movie, with the added bonus of a cousin, Sofia, and Daddy joining us for the afternoon!

Sofia was expected about midday and the film was at 2.30pm. Sofia and Callum were all excited about the bread making when I decided to change the plan to see The Lego Movie so I had to try to get both activities in.

Therefore, after dropping Millie at nursery and Stuart at work, the first task was to make the dough (well actually, after the usual dishes, laundry and cat related chores…there are always chores to do first kids!).

Once more, I had to keep a lid on my inner-control-freak and remember ‘I was doing it for the kids!’ So Callum helped me measure out the ingredients and got his (clean) fingers stuck in to mixing – OK so there was a bit of “let me just see if it is all mixed” and “let me pull in the dry ingredients at the bottom” oh and “Ill start off the needing”…what? Neither of us got stressed. I count that as progress!

He helped need the dough a bit before he thankfully got bored. Then off we took it to the airing cupboard to prove.

That took us until 9.30…still another couple of hours or so until Sofia due, what next?

We played games (while I continued with the odd chore). We played Jenga (which I lost

), then Walk the Plank (which I won

Soon it was lunchtime, ‘Fia arrived and then it was time to get back to the bread making!

They both loved it, treating the dough like play dough and making different shapes and…er…lumps of things. They got covered in flour, wrote their names in the flour and I may have started a flour fight. We each made one thing to put in the oven then the remaining dough I had intended keeping for myself to make another masterpiece *cough* but I relented and let them share it between them for more doughy fun. 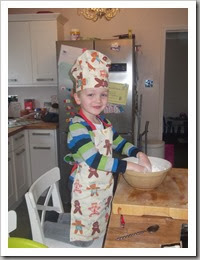 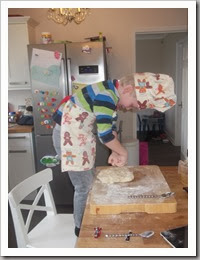 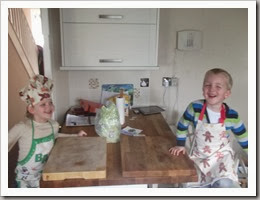 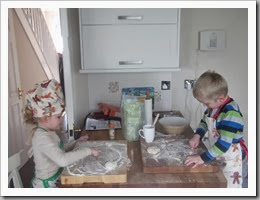 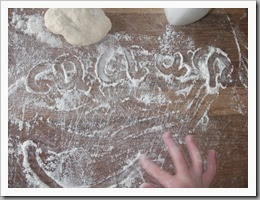 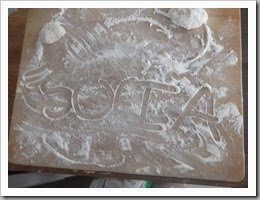 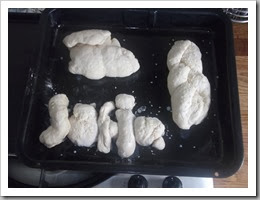 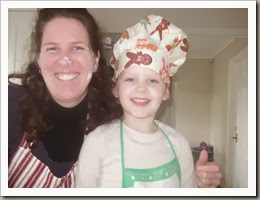 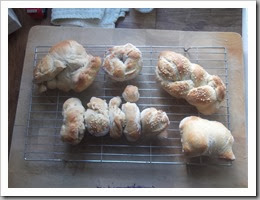 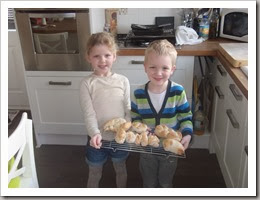 After the bread had been baked there was just enough time for a quick taster before we had to head out to pick Stuart up and head to the cinema.

The movie was enjoyable enough – definitely only for those that share an affiliation with lego as the comedy moments are centred around the trials and tribulations of lego crafting. I thought they could’ve played more on those and had a few adult humour moments like they do in the Pixar animations but I found it enjoyable and Stuart had a couple of LOL (while I slunk down in my seat) moments. Callum, bless him, doesn’t get on too well with the glasses, or any glasses for that matter (we went to the 3D version) which I think is down to his little nose which doesn’t have much of a bridge to hold a pair of glasses. He kept taking them off which meant he didn’t get to appreciate the full experience and he seemed to struggle to retain interest for the last half hour but he says he really enjoyed it and that it was his favourite part of the day. Sofia also said she enjoyed it but I saw her fidgeting for the last 20 minutes too. At 5 and 7, I think it is still a long time to expect them to sit still and pay attention. I think what kept Callum’s attention was the inclusion of his favourite characters, Batman, Superman and ‘The Green Ninja’.

Overall, it has been another good day. I’m still surprised at just how upbeat I am after such a miserable winter (both my mood and the weather). Like they say ‘a change is as good as a rest’. That is proving so true this week!

Tomorrow it is the family outing (Stuart and Millie included) to London to check out the Natural History Museum which, despite me thinking of it before I saw Callum’s homework book, fits in nicely with Callum’s half term homework project!