A problem shared still leaves me with the chores! 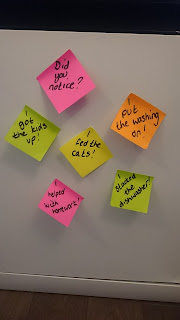  
I've just read a couple of articles about the University of Minnesota concluding after research that Mums are less happy and more tired than dads because they are doing the lion share of the parenting and household jobs.

I replied with a flippant comment in agreement with the 'discovery' but thought I'd write a fairer reply.

My husband isn't useless and does 'parent'.

It has always been important to me that he was fully involved in the parenting and the decisions. I didnt want to be like many couples where the mum could go away for the night without leaving step by step instructions - he was their dad, he should know.

That had pretty much been the case with the awareness that I have spent more time with them so have had to make decisions without him at changing phases and this requires communication.

I also wrote a post early in Callum's life (Some Mothers don't have it) acknowledging that mum doesn't always know best and we should trust dads more and try their ideas without being so quick to dismiss.

How life looks now is that typically we share school drop off and bedtime duties (one will cook while the other puts to bed and we alternate each night).

I'm working away more often now so Stuart will be solely responsible for the children just like I am when he is working away or late home. No brainer and what you would expect to happen.

I am lucky that we can afford a cleaner once a week (we pay my mum) so many household chores are taken out of the equation.

However, the debate over who does more still regularly raises its ugly head.

By way of example, on a Monday we usually come home from work together. He will come in, get changed, grab something to eat and sit on the sofa reading on his phone. Meanwhile, I'm helping with homework, making tea for kids, emptying and putting out bins, doing laundry, emptying and restacking the dishwasher and generally running round like a blue-arsed fly!

In the mornings I get up and dressed, get kids up and dressed, get them breakfast, make tea, empty and restack dishwasher, sort washing, stack bags, hurry them out the door. He'll typically get up 45 minutes later, get himself up, drink his tea, grab a banana or yogurt and get in the car. When I complain, apparently it's because I set the alarm too early and it all works out fine when I'm not around and he doesn't set the alarm at all. I have two issues with this:

There are no pink jobs and blue jobs in this house. Quite frankly they are either my jobs or our jobs. So no this isn't about gender or anti-feminism or out of date shovenistic beliefs, it is just about there only being room for one lazy person in a household and that person can't be me.

The arguments from him about how he works all day (when I was home with them - and yes, he really did say that) and then how he has a more stressful and draining job are not viable and he now admits this. Now we work for the same company he realises that just because he has more senior responsibilities, it doesn't mean my job isn't tiring or stressful.

Don't get me wrong, I am grateful. He is a good father and spends time with his family, takes our son to football every Sunday, plays with them, is much better than I am at role play games and has been a big support.

These aren't things to be sniffed at and shouldn't go without recognition.

Sure, he sometimes does the dishwasher, once in a blue moon he'll empty the bin without being asked and might even sweep a patch of floor and then follows the sentence "Did you notice that I swept the floor?", yes and I meant to thank you but how about everything I do that is attributed to the housework fairy?

Making sure childcare is paid for, paying for trips, buying new uniform is also left to me and then sometimes criticised when I get it wrong.

I'm not expecting a medal I just want to share the jobs and responsibilities. This will make for a happier Mummy and not the parent that is always the grumpy shouty one!

So this is my balanced opinion on who does more around the house and don't get me started on who is more tired / gets more sleep. That's a whole other blog post.

Rant over!  If you are still reading this far, thank you and well done.