BLW: Guest Post by Karen at Woman, Wife and Mum

First in my series of guest posts on the Baby-Led Weaning theme is by Karen. Karen has three children: Samuel (10); Oliver (3) and Isabella (nearly 2). As if her gorgeous children don't keep her busy enough, her eldest son has Chromosome 22q11 Deletion Syndrome, her husband has chronic arthritis and is waiting for a hip replacement and she is desperately trying to find her family a new home before they become homeless next month. Despite all this, Karen always seems to have a smile on her face and she still finds time to blog which is why I am flattered she spared some of that time to write this post for me. Thank you Karen. Please check out her blog after at Woman, Wife and Mum.
****************************** 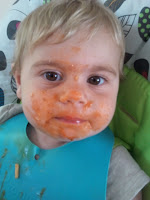 When I had my eldest son, Samuel, I prepared myself for the weaning stage by buying a baby puree cookery book and a blender.  I spent a couple of weeks spoon feeding him baby rice and then gradually moved on to concocting a variety of tasty purees and stockpiling the freezer with the colourful pots of food.
Seven years later and Oliver was born and quite naturally I decided to wean in exactly the same way as I did for Samuel.  In the beginning it worked, but as he got past 8 months old he was disliking being spoon fed by me and gradually ate lumpier food with his fingers.
Moving on another year and it was time to wean my daughter, Isabella.  By this time I was a frazzled mum of three and although I started out with all good intentions to cook and puree fresh food, the reality was that I grabbed a few jars of food from the supermarket.  Isabella was fine with this for a week, but quickly spotted the rest of us feasting on delicious home cooked grub and made a very determined stand by point blank refusing a spoon anywhere near her mouth.

That was the end of me spoon feeding Isabella.
I picked up a baby magazine with a handy pull out on baby led weaning - it wasn't something that was new to me, my niece who is a year older than Oliver was weaned via baby led weaning, but I had always had a misconception that baby led weaning would allow a child to eat unhealthy food, perhaps lead to fussy eating and definitely be a very messy affair!


Isabella wasn't budging though and would only accept lumpier food that she could feed to herself.  I gradually introduced a few pieces of cooked vegetables and fruits, breadsticks, toast, cheese and then added meat and fish.  She took to it like a duck to water and because she had already cut her first teeth when she was four months old, she found that she could bring food to the front of her mouth to chomp on with her front teeth.  She also developed a technique of popping her finger into her mouth to bring food to the front.
Despite my initial concerns, Isabella quite liked trying out all the foods offered, and out of all my three children she is the least fussy.  She loves vegetables and is a good chewer and eats plenty of meat, whereas the boys can be lazy with the chewing.  I do wonder whether this is because she didn't slurp on purees and in fact the lumpier food from day one encourages better biting and chewing.
I found the whole baby led weaning idea much quicker and easier, less stressful than trying to force a spoon into the mouth of a resisting baby and although messy at times, not really any more difficult to clean up than a baby spitting out puree.

I'm happy to say that my thinking that baby led weaning would not give a balanced diet was very wrong.  By keeping a food diary I could see that over a two week period even if Isabella chose to eat only pasta on day 1, 2 and 3, she didn't actually eat any pasta on day 4 or 5 and instead ate more meat and vegetables.
Posted by Unknown at 09:00