I really feel like Millie has made a bit of a leap forward with the baby-lead weaning in the past week. She is gagging less and less, she hasn’t lost any enthusiasm with trying new foods, if anything, she is even more enthusiastic and enjoying foods she has previously dismissed. As I type she is happily sucking the life out of a rehydrated apricot – her first try of this.

Her nappies are turning from a bright yellow to a woody brown colour with added lumps! (gross I know, sorry!) This tells me she is definitely swallowing some of what goes into her mouth! Whoever knew nappy watch could be so exciting (its not – I’ve not seeped that low…yet!).

Although we haven ‘t tried her on anything particularly spicy yet, if something has a tiny bit of heat (like a mild chilli) she hasn’t refused it…or burst into tears like Callum did making me feel just awful! She is another lemon lover though! No idea where either child gets that from but certainly not me! I hate lemon…even as a slice in a drink!

Her dexterity progress is slow. She still can’t really control a cup of water (with or without a sippy lid) and spoons, unsurprisingly, are still pre-loaded…and often whacked on the table top or chair until topping is removed!

I did have a lightbulb moment yesterday with medicine. Why, if I’m encouraging Millie to take a spoon in her own hand and eat off it, am I surprised when she gets upset or rejects medicine when I spoonfeed her it or inject it into her mouth with a syringe? Instead, I tried filling half the 5ml side of a medicine spoon (2.5ml being the correct dose for her age) and then carefully handing the spoon to her. It worked, she was much more agreeable to it though did get a little excited and flicked the last bit off the spoon at my mum & her glasses. I’d still call it a success!

We have had to get used to feeling like a celebrity when we are eating out with Millie as she gets lots of attention. Obviously, for being so goddam cute (in my unbiased opinion) but also because they are so surprised to see a baby her age eating proper solid food. Most of the attention is from grandparent aged people “wow, look at her chomping into that piece of celery – my grandson is older than her and he isn’t on that sort of solids yet and he is such a fussy eater!” was one amazed exclamation. Its not uncommon, these days, for parents who start weaning their children to also offer finger foods from 6 months (whether they started weaning at 6 months or before) so it surprises me that they are so amazed – perhaps its because she is a petite baby too so looks even more surprising. Or perhaps even when parents offer finger food when out it is less obvious.

I think we have won over my parents more this time than we did with Callum. Though think Mum disapproves of our reluctance to offer chocolate until Millie is 1 year old. She even bought her a chocolate Easter pressie, I think intended to sway us, but I’m staying strong. I’m not mean but while she doesn’t know what it is, I’m hesitant to introduce her. I’m not restricting her from anything else – if I was eating a bit of cake and, although I wouldn’t necessarily offer it, if she went for it I’d let her have some. I do believe no food should be taboo as it just creates a bigger attraction to it but I don’t want foods like chocolate to replace nutritious food while she is eating such little amounts of actual food (as opposed to milk). By 1 she should be on 3 meals a day so the occasional chocolate treat wont then be a big deal. The rest of us all eat far more chocolate than perhaps we should so there’s no harm in delaying her chocolate addiction! I think that’s it – we eat cake occasionally but chocolate frequently. While she is meant to be eating what we eat, cake is less of a frequent issue.

Once more (as with Callum) we have gone for the booster seat over high chair route. Mainly because we wanted something Millie could use both at the breakfast bar and at the dinner table. The only high chair that gets to both heights is gorgeous but also £400!!!!! But, to be fair, the booster seat is completely adequate as she is over 6 months and sitting up strong and we would want her pushed up to the table rather than using the tray anyway. We’ve gone with a cheapy, easy to clean, £15 booster from Mothercare. If your baby is over 6 months I’d actually recommend it over a space-taking cumbersome, sometimes expensive (unless from Ikea) highchair – it will last them right until they are ready to sit on a normal chair too! My sister said, after having 3 children, if there was one thing she would have changed for number 1 it would’ve been to not bother at all with a highchair – she only used it for consecutive children because she already bought it for her first. I’m inclined to agree with her having not bought a highchair for either Callum or Millie.

Here is the seat we bought. 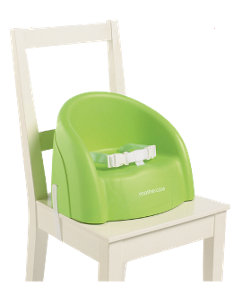 Here is Millie enjoying a Hot Cross Bun & some cucumber on her chair at the kitchen breakfast bar.

I really like these too and because my parents kindly gave us some money towards a highchair, I’m going to get one as they are really handy to put in the car to take to restaurants and for when you visit family or friends without children/with older children.

One thing was for sure, Millie had definitely outgrown the Bumbo and it really wasn’t safe for her to remain on top of the breakfast bar or table instead of on a chair.

My Dad loved seeing her joining in as part of the family pushed up against the table while we were enjoying our Sunday roast. I think Millie rather likes it too!