We have survived night two of Millie in her own room/cot. Much of it was the same but it somehow felt better.

After her anti-boob protest and just wanting a snuggle each time she woke the night before, I had decided to not offer to feed her unless she wouldn’t settle or ‘asked’ for it.

The night started very similar to the night before in that she went into her cot at about 7.30pm after her 7pm feed and finally drifted off about 9pm, though she did require a bit more ‘attention’ to get off to sleep than the night before.

Then we headed to bed at around 10.30-11pm but this time she didn’t wake…not until midnight!. So, I didn’t offer to feed her, I tried to settler her in her cot but she wasn’t having any of it so picked her up for a cuddle until she calmed and I put her back down. It didn’t take long, five minutes at the most.

Then, like the previous night, she woke at 2am and again just required a cuddle. As I put her in her cot again, her dummy fell out so I thought she need a bit more comforting but no, she was happy to continue to drift off without any trouble.

This was taking a familiar pattern so I expected the next 5.30 wake but this time she wasn’t settled by just a cuddle so I sat in the nursing chair and she nuzzled towards my boob so I offered it to her and she fed, hooray! No effort from me, completely her request.

I laid her back down in her cot and, after a couple of revisits to pop her dummy back in, she drifted back to sleep until 7.30pm. Unfortunately, my mind couldn’t stop thinking about the alarm due to go off in 3/4 hr so my morning pretty much started at the 5.30 mark but Millie woke happily chatting at 7.30am. 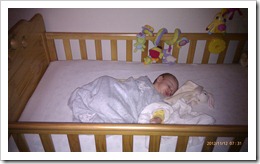 Minutes before she woke

This all means that she definitely doesn’t need feeding between 7pm and 5.30am so now we just need to get her to self-settle and continue to sleep through that period. Stuart thinks we should take away the dummy now to encourage her to depend on herself for getting back to sleep and not requiring us to get up to pop the dummy back in. This makes me nervous, but maybe he is right. I am pretty sure she’ll go for her fingers/thumb though. I’m on the side of anti-thumb sucking and pro dummy, as you may have worked out, so I’m not too keen on this but at least her h-Andes are on the end of her Armies (teehee, poor joke!) so she’ll be able to work out soon enough how to use them. She currently likes her muslin and I am trying to get her attached to her bunny comforter which helps. She snuggles them against her face and twiddles them with her hands so we may be lucky in that she just makes use of those sleeping tools.

In addition, we have Ewan the Dream Sheep that I have heard such good things about on order which may be another advantage on the ‘war on sleep’. Looking forward to testing it out when it arrives and I’ll be sure to report back!

In relation to sleep, I have also put Millie in her cot for actual ‘naps’ three times today. Only for 45 minutes to an hour for each (well the first two, she has only just gone down for the third) but I’m pleased at that for a start. The first she woke up happy, the second she was grizzly and really needed longer. Lets hope this third nap is successful and she wakes up happy again.

Y’know, I shouldn’t say this after all the effort we are going to to move Millie into her own room but I do miss her in our room – that space next to the bed where she used to big seems mighty big now!