Despite repeating the mantra “every child is different” it is still natural, when you have more than one child, to compare! Are they more chilled? Do they sleep better? When did the first one sit up, roll over, crawl etc, and will this one be sooner or later?

You hear stories from friends, family, strangers in the street – “oh the second child is a lot more chilled than the first, they have to be”. “My John was a great sleeper but his little brother, Roger, had us up every night until the age of 20!!”.
So, yes, I’ve been doing my own little bit of comparing since Millie arrived!

My memory of Callum was of the constant battle to get him to sleep through the night but waking up about every 1.5 to 2 hours at the start and every 3 to 4 hours near the end, eventually doing the much anticipated but felt illusive ‘sleep through’ at about 6 months! I considered this quite average. Not “my baby slept through at 6 weeks” wonderful but not “my child still wakes us up every night at aged 3” fear.

Millie, apart from the first few days where she was very ‘typical’ of a newborn, feeding all though the night and sleeping all through the day, it was very early on when she gave me a taste of sleep. Within the first couple of weeks she did a couple of 7 hour stints, then regularly slotted into a 6 hour sleep at night but once or twice going as long as 8 hours!

But that is no more – after playing around with formula versus breastmilk for a while (her and me) she has now slotted into a sleep about 8pm, wake for dummy about 11.30pm – feed between 1 and 2am then feed about 4am. I say “slotted into” like it is some sort of regular routine. She has done this for last 2 nights but still every night can be very different so I hesitate to say it is her ‘usual’ routine.

I will say, though, that she appeared to sleep much better when solely breastfed even when she was breastfed through the night but formula fed through the day I’m sure the 2nd 4am feed used to be more like 5am!

I sometimes wish she never granted me with that little taste – I’d probably feel much better about the wake ups now!

For Callum I remember holding him, rocking him, attempting to lay him in the cot, bending myself double so he thought he was still firmly held to me, managing to get him horizontal, gently starting to place him on the cot then “waaaaaaaaaaaaah” – screaming like I was placing him in a bath full of acid!

Trying to get him to sleep day or night on his own, self-soothing was laughable and reading back in my blog it appears I could spend a whole hour trying to get him off for a nap. But I also think I tried to push him into a fixed daytime sleep routine too soon. I still don’t have such a thing with Millie. With Millie, I’m all about the cues – the first yawn & grizzle she is straight up to bed whether she has been awake an hour or 2 hours, she leads the way and I place her down in her gro-bag (sleeping bag type thing) with her dummy in, place her muslin one side, her bunny comforter the other side, draw blinds & walk out the room. I may have to go into her once or twice to replace her dummy or muslin but it really is very little effort. If she is overtired due to missing the cues or trying to stretch her a little longer for whatever reason then I may have to hold her to sleep but even when this is the case, I can usually just get her to drowsy & place her down in her cot. With Callum, I never saw a cue until it was too late!

Their feeding patterns appear to be quite similar. Both have hit a 2oz per feed max phase about the same 3 month point. Neither of them ever ‘big’ eaters. I don’t think we ever got Callum up to 8oz and he wasn’t a big scoffer though he would take a bottle nearly every time you offered it, just maybe not take very much. This means, if he had his last bottle a couple of hours ago but I was giving him another as part of his bedtime routine, he would take it. Millie – not a chance! If only half hour before her next feed she will refuse, pushing the teat out with her tongue and batting the bottle away with her hands. She will sleep then wake up at her proper feed time – the little madam!!!

Despite Callum being born 3.5 weeks early, he was pretty strong at holding his neck up and Millie followed suit but, if anything was even stronger than Callum. Her legs constantly wanted to stand & she would throw herself back away from you with such force that you were scared she was going to throw herself out of your hands – you daren’t hold her with one arm/hand when she was upright.
Then very early on she blessed us with a smile, then shortly following a laugh. Her first roll from front to back was at 12 weeks – Callum was 6 months, 3 weeks before his first roll though was very early to sit at 5 months. We don’t know for Millie yet – its too early for sitting.

Of course, its still far too soon to tell how different their personalities are going to be and any further development milestones are unknown. But its exciting waiting to find out.
I think it is not so much that Millie is more chilled than Callum but when she hits the same or similar phases to Callum, I am more chilled about it & know things will take their own course there’s no use getting stressed about it. Apart from the milk consumption – I can’t help thinking if I could just get more milk into her during the day she’ll sleep better at night but – if my memory does serve me right it isn’t necessarily that one will naturally follow the other, I think the sleep came before the milk consumption for Callum.

It will be interesting to do another one of these posts in a couple of months time comparing the 6 months stage. 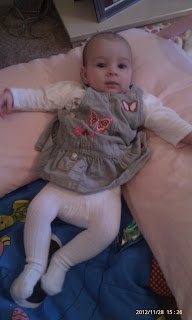