Weight: 10lb to go :o)
Well, we had lots of snow Sunday night/Monday morning. Callum isn't in the slightest bit interested. No fun! I bet we wont have snow like this for years now. Typical when he is too young to enjoy it. Stuart has been working from home but its not an excuse not to get into work, he is actually working very hard at home so no fun playing in the snow with him either! Also means we have been pretty much housebound. It hasn't been safe to drive (downside to living at the top of the hill - at least its good in the rain), especially with Callum in the car - even without. Had a worry as my online shopping got cancelled (twice) and we were running out of formula but our neighbours saved the day as they risked a trip to the supermarket and just about survived (the did say it was scary and many cars had been abandoned on the hill as they failed to drive up it). I was intrigued to see if Callum thought more of it if I actually to 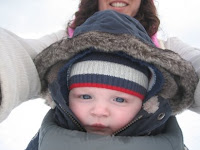 ok him out in it. Especially as I had seen a photo of a baby a couple of months older looking like he was enjoying himself. Unfortunately, I have no idea what Callum actually thought when I ventured out for a walk with him as he was facing away from me in the harness. I didn't here any giggles or coos so guess he was still unimpressed! Here is my attempt at a photo to see if he was enjoying it -as you can see, nonplussed!
Well, we haven't had another complete sleep through the night. After the first night, he went back to waking between 2.30am and 3am, but that was it after his bedtime so I didn't mind that. However, last night he woke up at 4.50am so, I feel like that he is improving all the time and that another complete night is not far away.
Daytime naps have gone back to what they were before last week's blip, with regards to length. Well, they are better anyway, if not perfect. He normally does 45mins to 1 hour now. Not 1.5-2 hours but it is better than 30 minutes. He can still take a bit of time to go down but you can't have everything can you? Was meant to go to Woking yesterday to get a blackout blind from John Lewis but couldn't go because of the snow! I think a blackout blind will help.
I'm taking Callum to London tomorrow (weather permitting) to introduce him to my old work colleagues (sorry I should say ex-colleagues not old colleagues ;o)).
Now, I'm certainly not thinking of no. 2 yet, certainly not for another 3.5 years (I'm still keen on not having more until Callum is 4) but I am surprised at how my attitude to breastfeeding has changed. I really, really hate my boobs now - if you can call the saggy bags that are left boobs! But, despite that, when/if we have no.2, I would be keen to try to breastfeed for longer. This depends on whether I got no.2 to latch on properly to both breasts. There is no way I would want to do the expressing I did this time. So, assuming all went well and knowing what I now know, I would try to breastfeed for longer. This attitude change, really surprises me. I think it is the convenience thing. It wasn't a big deal when I was expressing to go completely to bottle as I was having to do the whole sterilising and making up bottles anyway, but if I didn't have to do this, I can completely see how beneficial it could be to keep up the breastfeeding. On the other side of the coin though, I think Callum adapted well to feeding from both the nipple and bottle because we introduced both early on. I know this is against recommendations but I think people have found it more difficult if they have introduced a bottle later on. With this in mind, I think I would still either express for the last feed of the day (also to give Stuart a chance of feeding Callum) or would give formula for just this feed. Especially as this is when breast milk tends to be in short supply - at the end of the day.
These are just thoughts though and we are a long way off no. 2 - so no getting any ideas (you know who you are....Mother-in-Law ;o) )
Posted by Unknown at 19:43