Sorry, I know I’m meant to go all gushy about my little boy going off to Big School all on his own blah blah blah.  I don’t meant to trample on anyone’s feelings and make out that parents shouldn’t gush but just I’ve no need as he is sooooooo ready! And quite frankly so am I!

They can feed his thirst for knowledge much better than I ever can and then he gets to run off all that crazy energy with his new friends.

I’ve done the worry. I did that much earlier in the year when his hearing was still poor and I hadn’t met his teacher or been to the school since it had been redeveloped.

Since Callum had his grommets fitted & adenoids removed his hearing and speech has improved so much and in line with that, so has his confidence. I am confident he’ll be fine. We’ve talked so much about it, what’s going to happen, what he’ll do. He is fine with it which means so am I.

His teacher came for a home visit and she is lovely and set my mind at rest that he’ll be fine. He is the (yes ‘the’) oldest in his year and therefore his class and remembering what Callum was like at 4, he has a bit of an advantage over some of the younger more nervous little ones. This time last year, he would have been a completely different boy.

The school is now lovely. The changes they have made to it are amazing and it is such a nice space to learn. I have no concerns there any more.

I’m starting a new job in a week and a half (that’s the next post) so he’ll be going to breakfast club at the school and after school club until I finish work. It will be long days 5 days a week so tiring for him and I do feel a little bad about that but he has done it before, I’ve worked full time before, so I know he’ll be fine. But that’s one thing I’m not looking forward to – the grumpy teenager act which I’ve been warned about in the first term! However, I’ve talked to him about it and he is taking it all in his stride. I think he is happy that he’ll be near Millie – he is getting quite protective over her bless him. Says he is going to look after her.

Tomorrow is his first half day and he’ll continue with half days for the rest of this week then start full time on Monday.

He is so excited it is infectious. So, we are ready! Bring on this next chapter! Bring on the school years!

Tomorrow I’ll proudly update this post with him in his school uniform, completely with oversized jumper.

Here he is! And I can confirm the first week has been a success! 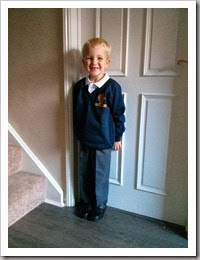