However, this post is about my little big boy turning five! Well, more about his 5th Birthday party. 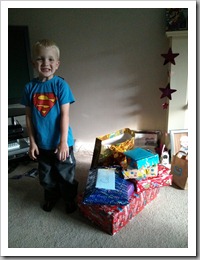 There have been birthday celebrations before but no big party, inviting lots of friends, entertainment & party bags etc. There was no escaping it this year as he’d been invited to his friends’ 4th Birthday parties and he knew a 5th Birthday definitely deserved a party so had been talking about it for months.

I’m no party organiser & the thought of loads of kids running wild in my house running cake into the carpet and spreading jelly & ice-cream filled me with dread. I did briefly consider planning a sports day style event & picnic over the park behind us but what if it rained??? We then looked into hiring a room at the local Children’s Centre which was reasonably priced and we investigated local entertainment. We liked the Sports Day theme so eventually found a company which ran mini Olympics. However, once I had received the list of friends from his nursery and calculated the cost of room hire, entertainment company, party bags, cake etc, it was looking to be a tad on the pricey side. We briefly toyed with keeping the room and providing the games and entertainment ourselves but figured we could get someone else to do the lot for us and host it for a similar price! So we thought anyway but looking into it, there was very little under £10 per head and we were looking at a possible 10-16 kids! Up to £160 without adding the cake & party bags on to it all. Kids parties were SOOOOO expensive!!! I don’t even spend that on my own Birthdays or Stuarts!

Finally, after a case of knowing someone who knew someone we managed to get a fantastic deal on a local theme park and, even better, they provided the party bags, a lunch & drink was included and the rides and soft play provided the entertainment!

There was a slight panic about getting the invitations out in time. Callum was leaving nursery a week before his party and some of his friends had already started to leave. Not having anyone’s addresses I had to get them into nursery before anyone else left (aside from the non-nursery foke). I was up late designing the invitation and writing them all but got them done in time and invites went out to 16 of Callum’s friends.

It was exciting when the replies started coming in but they came in slowly! We needed a minimum of 10 children (and a maximum of 16 including Callum). I eventually got 10 replies saying yes and 2 saying no and then no response from 4 (which I’ve since heard isn’t a bad reply rate). This left me worrying about if any dropped out last minute and would the remaining 4 just turn up on the day (which another friend told me happened to her).

Callum had asked for a specific Birthday cake – Angry Birds (thank you Layton, who had an Angry Birds cake at his party). I’d spied one in Asda a couple of weeks before so thought fine, no problem. The day before his party I went to buy it in my local Asda and there weren’t any, a dart to another supermarket on the day still turned up fruitless. Stuart eventually left me and the kids at the Park meeting guests to mission it to the original Asda I’d seen it in.

The plan for the day was to meet everyone at the gates at 11am, rides fun for an hour then head for lunch in the themed function room which we had for an hour and was right next to the soft play to keep the monsters children entertained for a bit then finish off again on the rides. We’d specified an end to the ‘party’ at 3pm but made it clear the guests had use of the park until it closed.

I’d come up with a great plan to brightly sticker the children with their names so I could try to spot them when time to round them up for lunch if groups had splintered off.

Most of the children (and their parents) turned up fairly promptly but after 15 minutes, we were still waiting for one and some of the children were getting fidgety so I texted the mum and inside we went. Although all the children were stickered (at least for 5 minutes), the kids darted off in several directions and I didn’t manage to get the message to all of the parents that lunch would be inside at 12 and to make their way to there just before.

The time flew quickly as we ran here & there, me frequently checking my phone for an update of the missing guest and before I knew, it was time to round up the guests. First we had to pay for the number of guests we had. I tried calling the Mum and left a voicemail after no answer so paid for just 10 (including Callum) then head out to round everyone up.

Just at that point the mother of the missing guest called me to apologise and she was sending her husband and child along right away. So we had to pay for the extra guest & order their meal which is when I bumped into Stuart with the cake and had to run straight out to locate everyone to shepherd them in to lunch. Didn’t realise just how big the park was until I had to run all over it and stickers? What stickers? Eventually, my sister called to say that she though everyone had made their way over with a few stragglers making it over just as I got there.

Callum and his friends were visited by and survived an encounter with the Dark Side of the Force, Lord Darth Vader himself under watchful Storm Trooper guard. Darth immediately felt the presents (presents as in presence? Get it?? OK, groan).

I kept running back to the park gates to wait for the missing guest.

The cake got delayed and delayed until they started to lose children to the soft play so I headed back and the cake was brought in by Alice, The Mad Hatter and the Queen of Hearts along with a little gift for Callum. The cake was packaged off into party bags which were then brought in and distributed to the children’s parents. 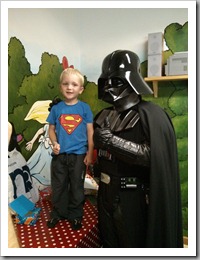 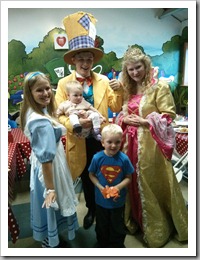 Off to the soft play the children ran again (especially as it started to rain outside).

Eventually they arrived looking rather flustered, well the Dad was, bless him, just as we were packing up the room. Layton (yes the one responsible for the cake of choice) joined straight in with the fun, however, and I know Callum had a great time playing in the soft play and then going on the rides too so appreciated the effort of them making it down.

Parents and children (together of course) started leaving about 2pm and then we left with the last guests at 3.30pm at which point we were getting rained on more and more frequently.

As a party venue it was a great place, Callum had a wonderful time. I did feel guilty that the guests went off in their separate groups as obviously different children wanted to go on different rides and see different things whereas the point of a party is the children all play together but I’m pretty sure all the children enjoyed themselves and I know Callum definitely did and did manage to spend time with different friends throughout the day.

And for Callum the day didn’t end there, when we got home we ate cake (which was worth the effort to get – strawberry flavoured icing!!!) and he opened his presents and got some amazing stuff (which makes me feel a little embarrassed for the gifts I’ve bought other kids for parties in the past!!).

Rumours are the parents leave the kids to it next year! I’m thinking of holding it in the pub? Sure way of getting parents to stay, yes?

At least I’ve another few years before I have to do the same for Millie!!!