BLW: Guest post by Sarah at Adventures as a Mum

Its Week 2 of my guest posts and my third contributor is Sarah.

Sarah is a full-time SAHM to her 6 month old Son, The Boy and has a couple of cats. Like all my guest postees, Sarah is one of the many mums I met on Twitter. We became mutual 'followers' around the same as I was expecting Millie, or was it on the #Nightfeed!?! It has been great to share experiences and challenges we face with our Little Ones and not to mention have someone to chat to in those early hours when it can feel very lonely. I was thrilled when Sarah agreed to share her own experience of BLW on my blog, especially as she has only just started out in the world of Baby-Led Weaning after her son turned 6 months at the end of last month. Thank you Sarah!

Sarah also blogs at Adventures as a Mum, writes book reviews at A Kindle & Kittens and has just started a business selling her crafts at The Crafty Octopus - wow that girl is busy!

My little man turned six months on 24 April, and one of the things my husband and I were keen to do was to introduce a wide variety of foods to him.

As he was born early, I wasn’t sure if he would take to BLW bang on six months, he has been around four weeks behind his peers in terms of development (eg smiling etc). However he really surprised me and with great gusto enjoyed his first bit of food last Wednesday -  a slice of toast.

For us, taking a BLW approach seemed logical. It seems much easier than pureeing food, and I’m also keen to ensure that he doesn’t grow up to be a fussy eater like me! Even to this day I can’t eat soup and yoghurt with bits in. Ridiculous I know.

In some ways, BLW is hard – for me it is most noticeable when talking to mum friends - I am the only one of my mum friends taking this approach and many started weaning their baby’s before the six month mark and I hear all about the (purreed) meals their children are enjoying. However, we are trusting the BLW method and I have to say that, one week in, we’re really impressed.

In a short space of time Daniel has already learnt the difference between holding a slice of banana, potato cake and melon – he knows that if he grips the banana too tightly it squishes (but he also learnt he can lick his hand!!) and he soon learnt that melon is slippy. It is amazing to watch as he tackles each new thing placed in front of him, and watching his reaction as he tastes it. I can honestly say there has been only one thing he hasn’t liked, and that was avocado. He even enjoyed some spicy home made falafel last week – I was really surprised as it was super spicy but he seemed to enjoy it.

So far he has had:

It is hard in some ways, as Daniel isn’t actually taking much of the food in, but already in a week he is learning new skills in terms of his hand co-ordination and he knows when I am eating too. He is taking as much of his milk feeds as ever, but I am positive he is enjoying the experience.

Another by product has been that I am more conscious about what I am eating – I try to eat on the basis that if Daniel wants some of what I am eating then he can. So crisps and chocolate are out, and fruit and veg in. It’s really nice in the morning to share breakfast together and to not have to worry about getting stuff pureed and mixed for him.

Yesterday, I gave Daniel a yoghurt. I pre-loaded the spoon and he reached for it, and straight into the mouth,. He very quickly learnt that once the spoon was emptied if he handed back to me, it was loaded up again. I did try to get him to load it himself, but we are some way off that skill yet. However – the pictures below show a very happy boy!

BLW is really easy and seems, to us, to be the best approach. Daniel is eating foods that his peers are months away from trying and he is visibly excited when each new thing is presented to him. Today I am off for lunch with a friend, and Daniel will try whatever I order. I can’t wait to see where he is at in a months time. 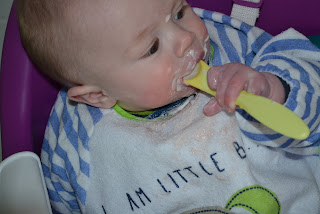 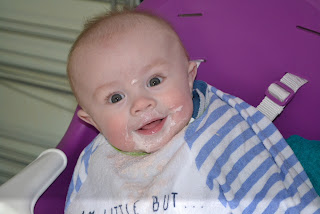