Another great contribution to my series of guest posts on Baby-Led Weaning. This week we have Kaajal, a Mum of 2 who had her daughter about a week after I had Millie. Both the girls have been so similar right from the start so its been lovely to share our experiences as our daughters have been going through phases at the same time. Although this is Kaajal’s second child this is her first experience of BLW and rather than a wholly BLW approach she is combining it with the occasional spoonfeed for softer meals like porridge.  Not already a blogger but considering venturing into this amazing world and I feel privileged that her first dip of the toe is a guest post on my humble blog. Thank you so much Kaajal and good luck if you do decide to continue blogging.

Life pre-number 2 was pretty easy. My son was old enough that he ate what we had (without any chillies) and at most, if we were going out, just grabbing a bottle of water was sufficient. Gone were the days of carrying around a huge bag for him!

Along came number 2 and the age gap of over 6 years meant that weaning D felt a bit of a distant memory. I'd previously gone with the traditional route of first tastes and puréed mush with huge success actually. D eats pretty much everything. He's not so keen on boiled cauliflower, preferring to eat it raw, but I can't really blame him for that.

The main thing that I felt D didn't do though was chew. He seemed to be quick to shovel food in and swallow it as quickly as possible. Some of this I now attribute to him being a mouth breather, but he does seem to have grown out of it now. When he was at nursery you could literally tell what he'd eaten that day by the contents of his nappy (sorry TMI!) and I wanted to avoid this.... Leading me to consider BLW.

Another consideration for BLW was purely related to the (lack of) effort involved. I'm breast feeding J so know that if she's not eaten much, I'm always there to top it up - making it even less to consider when feeding her out and about.

Although there were many 'for' points, the main one what I battled with in my head, and still do, was the mess. With D spoon feeding had been pretty clean; probably due to him being so open to new foods and chilled enough to open his mouth whenever a spoon was in sight!

One thing that really helped was ditching the old highchair - a fully padded, reclining, height adjustable all-singing, all-dancing thing for the basic ANTILOP from IKEA - so easy to clean! (Although avoid until baby is sitting very stably).

Our journey with BLW started with a few bits of steamed vegetables. Broccoli was a no-no. Asparagus a hit. Green beans were chucked off the highchair and promptly consumed by her big brother! 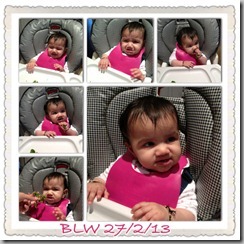 Undeterred, the next day I offered J a banana. Things started off pretty well and soon went downhill from there. J has always had a very hard suck. It seems that this power also equated to a very good bite. Once she's got bite of something it's very difficult to get her to give it it up! She managed to take a huge chunk of banana into her mouth, gag on it and then proceeded to cry for the next 5 minutes - especially when she caught sight of the banana. 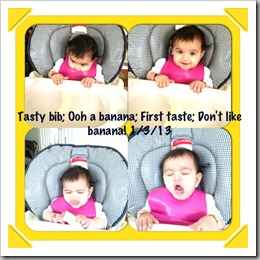 I don't know when we reached the turning point. J has really got the hang of finger foods like rice cakes, biscuits etc. Her pincer grip seems to have developed overnight and happily chases raisins around her highchair too. Breakfast has mostly become a time for spoon feeding. I give J porridge. She happily eats it. Lunch time can be anything really - we like BLW pancakes and banana muffins. 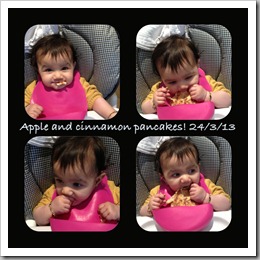 Out and about, depending on where we're going I've made food for J to hold and eat or just let her have what we are. The Tiny Dining mat (I bought mine from John Lewis) has been put to some use and gives me comfort about whether an area is clean or not.

There's been days where J blankly looks at the food in front of her but if I feed her bits of it she'll happily eat - hopefully not a sign of future laziness as it's at times I know she's hungry!

The grandparents still continuously nag me about her choking and have helpfully brought round boxes of Farleys Rusks to get some 'proper food' into her; they've been dumped on a shelf in the utility room, and will be disposed of gradually.

There's no conclusion to this story yet. I still need to be more adventurous (and brave?) to just let her get on with messy foods. We're getting there slowly and seem to be enjoying the journey so far!