BLW: Baby led weaning versus puree feeding: My experience of both–Guest Post by Karen at Tales of a Twin Mum

The final post in my series of guest posts on BLW is from Karen. Karen is married with three children – twin boys T1 and T2, who are 3 and a half, and an 8 month old daughter E. Karen is a freelance copywriter and regular friendly face in the blogging community and Twitter. She is also one of the few whom I’ve had the pleasure to meet in person when I first moved to Bournemouth at my first ever Tweetup! After taking a very short break from blogging to landscape their garden (which I can’t wait to see photos of) I really appreciate Karen taking the time away from her busy return to blogging schedule for Tales of a Twin Mum to contribute to my guest post series with her own experience comparing the traditional purée weaning to that of baby-led. For those of you thinking of starting BLW, Karen has also written her own great post on her own blog, including some ideas for first foods to try, which can be found here. Thank you Karen.

When my twin boys were four months old, our health visitor advised me to start weaning because T2 was being sick all the time and she was convinced it was reflux and would improve with real food. It wasn’t and it didn’t, but that’s a whole other story. Because they were so little, I had to begin with baby rice and purees. I found it exciting buying a hand blender and making up ice cube trays of foods for the freezer as I couldn’t wait for my boys to move on to the next stage of their development. The only problem was that half of the things we ate for dinner didn’t work as a puree (chicken salad, fajitas, pork chops…the list goes on), so it wasn’t long before the excitement wore off and I started getting stressed that I didn’t have the time to make them separate meals to us.

As they got bigger I struggled to get them to take lumpy food, as they preferred it smooth. They’d often gag and be sick because of eating tiny lumps. I was terrified of the idea of giving them toast or sandwiches as I didn’t think they’d be able to cope with them. By the time they were about nine or ten months they started to turn their noses up at foods, especially if it was something homemade rather than a jar of baby food. As the months passed and they became more independent I was happy letting them self-feed but they were still very picky. If I made them chicken sandwiches T1 would eat the meat and pass his bread to T2, and T2 would eat the bread and pass his meat to T1. If I gave them hard boiled eggs T1 would eat the egg white and T2 the yolk, so at least food didn’t go to waste but it meant they were both missing out on the things they were avoiding. Their eating has gradually got worse, and now at three and a half they are both super picky. I can usually get them to eat things with hidden veg in the sauce like spaghetti bolognaise or homemade pizza, but every meal is hard work. We have to use pudding as a bribe EVERY DAY – if you don’t eat X amount of this you won’t get that. I never thought I’d be that sort of strict parent but if we didn’t do it they would literally survive on fruit, yoghurt and biscuits. I don’t let it stress me out; I know they’ll eat if they’re hungry and they have plenty of energy but it does get exhausting beginning every meal with them refusing to taste the food. If it’s something they’ve never tried before they will not taste it, no matter how much bribery I use. 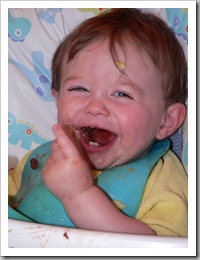 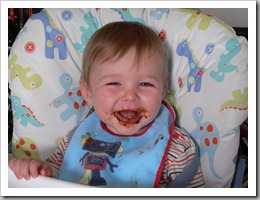 With E I wanted to do everything possible to a) make weaning easy b) make her an adventurous eater and c) get her eating what we eat right away. We decided to wait until she was six months and try baby led weaning. It has worked amazingly well. She eats noodles, sandwiches, pasta, Yorkshire pudding, potatoes, beans, carrots, stir fry – literally everything we put in front of her. The only thing she hasn’t liked so far is melon, but I’m going to give that another go and see how we get on. I know that she’s eating (or sucking on) things off our plates that the boys never did (garlic bread or slices of olive, for instance) so I’m hoping with all hope that she stays on this path. So far so good. I’ll have to report back in six months or so to let you know how we get on, but I *think* this time we have a real eater rather than somebody who eats the breadcrumbs off a fishfinger and leaves the lump of soggy fish behind (yes that refers to you, T2). Keep your fingers crossed for us! 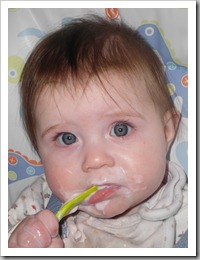