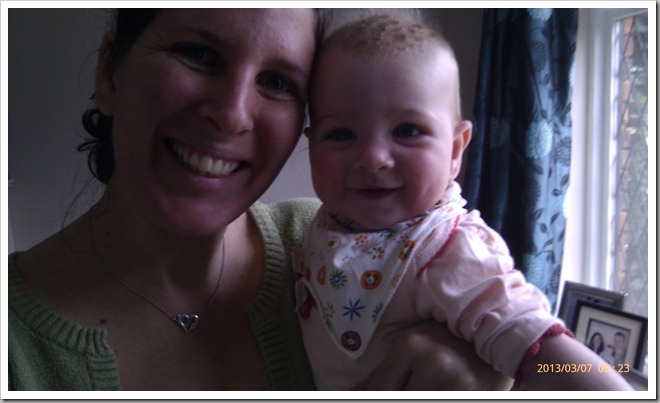 As Millie is approaching 7 months old (in 2 days) I thought I’d give a bit of an update on how she is doing, aside from the weaning.

Millie has been sitting up well now for about a month, first sitting up at about 5.5 months. She still has the occasional fall so I do still protect her but she is much better at correcting any over-balance.

I feel like we’ve been at the are we, aren’t we teething stage since forever! Second guessing every grump or symptom. Every week is a different teething symptom. Last week was the acidic dribble causing her a sore mouth, particularly where her dummy rubs (she only uses it at night) and crying out randomly in sobbing tears (Millie doesn’t really cry, just sort of grunts when she is tired or hungry so this really breaks your heart), this week is the snotty bum! Still no sign of those blasted teeth though! She has been particularly unsettled today leaving me confused an hour after waking whether she wants to go back to sleep as she only had a short nap last time or whether a couple of hours after her last feed she wants feeding again and only having a couple of ounces.

One thing that I have noticed, where teething is concerned, that is different to Callum is the acidic dribble. Callum wasn’t much of a dribbler at all really but he had the most awful nappy rash. So red raw that it was close to bleeding and took ages to clear up*. Whereas Millie is a dribbler. Millie gets sore around her mouth with dribble rash but doesn’t suffer from nappy rash (*quickly touches wood/forehead*, not so far anyway). I guess that’s it, Callum swallowed his dribble so it caused the rash at the other end.

Back to Millie progress!

One thing I’m loving at the moment is her babbling. I noticed about 10 days ago that she was saying a kind of “dadadadada” which I was most excited to tell Stuart about…and immediately started to counter with saying “mmmmm mmmmm mmmmm” back at her to no avail! But now she also says “lalalalala” and “blablablabla”. I love it, its adorable!

Things that make her laugh are squealing or screaming at her; whispering into one ear or nuzzling her neck. She also loves Round & Round the Garden done on her tummy and then tickling the right side of her neck getting excited as you walk up the fingers to her neck. Oh, and of course, Row, Row, Row the Boat with actions!

She has rolled back to front, properly with no assistance, just the once but yay, she has done it!

Callum is so good and lovely with her. He’ll have cuddles with her and try to get her to hold his hand. He asks to kiss her goodnight when she is going for a nap. He is still quite protective over his toys…just he wait until she starts crawling! 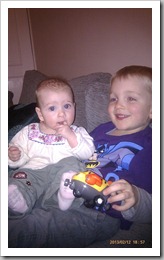 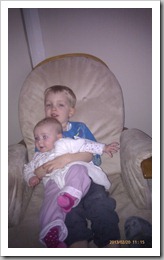 Lastly, to finish on my favourite point, when I pass Millie over for someone else to hold her, she looks at me as if making sure I’m not running off anywhere. The love I feel she has for me at that moment, in that one look, just makes me feel so warm inside and melts my heart. 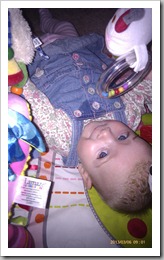