Its been over 2 weeks now since we started BLW and progress is slow but there definitely is progress.

One of the things it is difficult to get used to in the early days of BLW is trusting your child & your child’s body to do what’s right. By this, I’m talking about the risk of choking. They say as long as your baby is sitting upright and their necks are strong enough, their gag reflex should do all the work and the risk of choking is, theoretically, lower than spoon-feeding.

Being as this is my second child, it is much easier this time, reassured by the fact that Callum never choked. It was frightening the first day I gave Callum toast for breakfast. It was one of his first introductions to food and he really gagged on it and threw up an entire bottle of milk with milk coming through his nose. I fought the urge to run to him and pick him up etc, I just put on a smile said “oh dear” and…..er….took a photo! (Only after I knew he was ok! You’re saved, I’ve not got the photo which came after on this computer but below is the one just before!!) 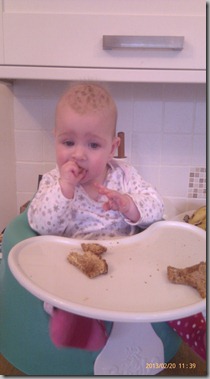 I was a little hesitant to offer Millie toast at first, but she gagged and puked on banana and other stuff so I plucked up the courage to offer it to her and she was absolutely fine, no puke! In fact, its one of her favourite foods that she’ll happily gum for ages. There is even evidence in that fabulous game we now play “Identify that Food in the Poop” (yes, we know how to have fun in this house!) that she has swallowed some of the toast – tell tale black/brown flecks.

If you do trust your little ones and they are safely positioned, it is highly probable that they will gag in the first few days/weeks. Their gag reflexes are so sensitive and they also have a tongue-thrust reflex which pushes objects to the front of their mouth. Amazing what our human bodies do and that babies are born with these reflexes to protect them from choking. As babies learn to have more control over their tongue, the tongue-thrust reflex will relax, soften, whatever the correct terminology is. I’m already witnessing an improvement with Millie’s tongue control skills. She wont always just let the food fall out of her mouth or her tongue doesn’t always push it out, sometimes she manages to purposefully control her tongue to push the food back and swallow. There may be a bit of a tongue-food tussle first but, occasionally, Millie will win.

It really helped to be told that gagging is a natural reflex action to having food in their mouth….and therefore it is also natural for them to be sick. Also that if they are coughing, they are breathing and therefore they are NOT choking. If they are coughing or gagging, do not pick them up and hit them on the back, let their mouths and bodies clear the food on its own. If you are unsure, Google the difference between gagging and choking. There are some YouTube vids of babies gagging to show you what’s ok. This site was also quite helpful.

This all said, I would also advise any parent, when they are approaching the weaning stage, to do a child’s First Aid course or to remind themselves of what action to take if you’ve already done one, just for peace of mind, whether you are puréeing or doing BLW. Saying they are unlikely to choke is different to saying they wont choke and it is better to be safe and to know what to do just in case. It will also help you to relax about it and just trust them to get on with it.

Now back to Millie – strangely, she does seem to be a bit slower to grasp feeding/weaning/eating than Callum. Callum was able to use his doidy cup a lot earlier than Millie – Millie’s hand control is still a bit erratic so she just throws the water over herself. Same with a shot glass (so wrong but works….don’t worry, it only contains water!!). Even in her TommieTippee Cup she picks it up sideways and bites the edge. She does love water though. The first few times she was offered water, it cascaded out of her mouth in a waterfall affect but she’d grab for more and more. Now she manages to swallow.

Butternut Squash Risotto – great fun to play with but not much consuming
Houmous – not really a fan and doesn’t understand dipping yet
Chips – I know, naughty, but once in a while wont hurt. Unsurprisingly she liked it!
Celery – had a really good suck on that
Prawn – ignored
Roast carrot (may have tried that last week) – not fussed
Roast onion – thought she liked it at first but then couldn’t get it out of her mouth quick enough
Yorkshire Pud – liked

A firm favourite which she had previously tried is definitely red pepper.

One thing I’m really enjoying is my renewed enthusiasm to cook real homemade meals again for Callum (and Millie). I had got a bit lazy with my having to cook 2 meals a day firstly for Callum and then for Stuart and I later. But now I’m making homemade versions of the favourites like chicken nuggets (and homemade chips) and also things like vegetable croquettes, the butternut squash risotto, beef casseroles. I’ve a fish pie pack in the freezer at the ready and looking forward to making fish fingers and/or fish cakes again. So easy to make but haven’t really done it since Callum was little (well, a baby/toddler, he is still little).

I did make lots of dinners from scratch and we did eat fresh food regularly but where I’d sometimes reach for the premade frozen fish fingers or nuggets, I’m now making my own and trying new recipes again.

This has stretched to when we have guests come and stay too, I’m wanting to cook new things rather than stick to the old faithfuls, shop bought or take-away.

Now to finish on a couple more photos of Millie for you: 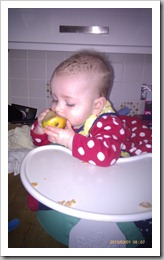 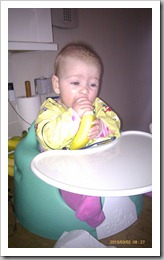 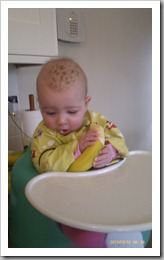 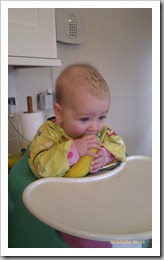 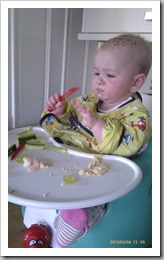 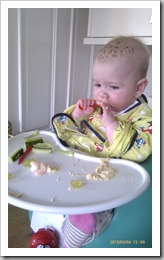 3. Enjoying a Red Pepper from a prawn salad 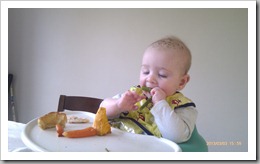