In 5 days time, Millie is going to be 6 months old.

She is changing so quickly. Its hard to believe that it wasn’t only yesterday that she was a real babe in arms with her head supported in the cradle position.

Now she is sitting up…although still toppling a little bit. She can sometimes stay sitting up playing for a good 5 minutes unsupported. She loves sitting up too – fighting it if you lay her down or put her in her bouncy chair. 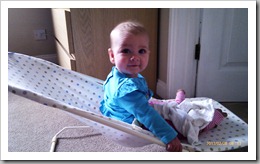 Despite showing early signs in both rolling and sleeping through the night…neither have been regular occurrences. She has still only rolled front to back and only a handful of times. She swings her legs and arches her back so that she nearly rolls over, she looks like a contortionist. 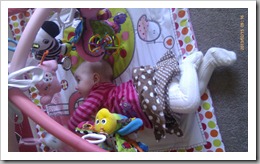 Sleepwise, she ‘usually’ doesn’t need feeding after a dreamfeed at around 10pm but that doesn’t mean she sleeps through. She has taken to waking up around 3am every night. Sometimes just needing a dummy or a cuddle, but more often she struggles to settle back to sleep with the dummy, falls off to sleep with a cuddle but wakes again when placed back in the cot. I eventually end up feeding her but not before I’ve already been awake for an hour and I’m not convinced she is waking for the feed. She cries differently.

We are going to try without the dreamfeed tonight to see what happens. I’m happy to feed her when she wakes but I remember the dreamfeed not working for Callum and I know she has been able to go for long stretches before now without the dreamfeed so it might work. The thing with Millie (and I’m sure many a baby) is that everything seems to work for the first couple of times then her sleep pattern gets all messed up again, whether due to teething, a new development stage, stuffy nose or just because.

Speaking of development stages, her latest trick is the bashing movement. As its new (this week) I’m quite excited by this. She hasn’t got enough strength to be too loud or damaging yet but I imagine as her confidence grows the loudness will come with it.

She is really into faces and wanting to explore them with her hands and she likes playing with my hair…when she is meant to be trying to get back to sleep at 3am!!

She has good hand to mouth co-ordination now which is great in light of starting to wean her next week. I’ve been giving her a spoon to play with at meal times and she loves a good chomp on that. She has a great expression when we’re eating as if to say “OK, so where’s mine?”, looking at the food, looking at me, then looking at the food again. I know this is curiosity and she has no awareness of what ‘eating’ actually is but its a positive sign that she will enjoy exploring this funny food stuff next week. She ‘may’ already have sucked on a banana and an apple core…oops! 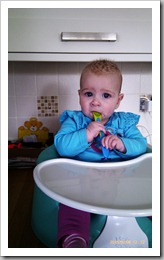 You know, I think development phase may actually be the key to her unsettled nights! She is on the verge of so many things – very nearly rolling, just learnt to sit up, about to start weaning, having more control of her arms etc. She is also looking like she is going to change her nap cycle too as her first nap of the day can just be 10 minutes sometimes.

I think there are exciting times just around the corner…and may be even a little bit of sleep!