If you read my previous post, Why I Can’t Wait for Weaning, you’d know how excited I was for Millie to turn 6 months so we could start Baby-Led Weaning. We did Baby-Led Weaning with Callum and I couldn’t wait to try it again with Millie. The date she turned 6 months was Wednesday, 20 February. I thought it couldn’t hurt to go by 6 months in weeks (24 weeks) and I assumed that would be sooner than the Wednesday, so started ‘officially’ on the Saturday before.

For the previous couple of weeks Millie had been really honing in on whatever we were eating and if we made the mistake of passing our hands holding an item of food within the reach of Millie, she’d be on it! Dragging it to her mouth!

So, when we popped out for a pub lunch and Millie, while sat on my lap, reached out to my (undressed) salad, I let her. Red and yellow peppers, cherry tomatoes (halved), lambs lettuce and cucumber. She tried it all, enthusiastically. Of course, just gumming it some and not consuming, but she gave it all a good go. 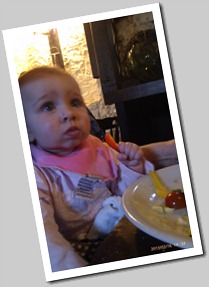 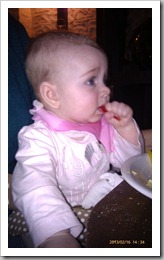 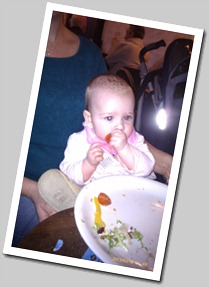 Since then, as is normal with BLW, its been a bit here and there. I’m keen to keep what she tries as healthy as possible and our diet hasn’t always been that healthy or its just been unsuitable. That said, I think there has only been one day where she hasn’t been offered anything at all.

Her interest in the food once she has it is very changeable. Sometimes gumming it with gusto, often biting bits off then coughing or gagging them out or sometimes showing no interest at all after an initial investigation with her hands.

I will say, she is much more inclined to go for the food if it is from a plate in front of me and she is sat on my lap. She looks really put out if I’m eating something and she isn’t allowed to try any.

Things we have offered her in the past week (aside from those always mentioned):

Apple on a core – loves
Toast fingers – loves
Cheese omlette – no interest
Roast chicken – bit of interest but not much past first gum
Cheddar & Babybel Cheese – likes
Brie – no real interest
Banana – liked but didn’t like it in her mouth
Sausage – tasted but no real interest
Butternut squash & potato mash on a pre-loaded spoon – appeared most perturbed that her play spoon had some mush on it
Wheatabix on a pre-loaded spoon – pulled a funny face at first but wasn’t too disgusted
Roast potato, roast sweet potato and roast carrot – tasted but not much interest after initial taste
Grapes (halved) – liked
Peas – not expecting her to get any to her mouth, was more just to play with while Callum had his dinner
Rice krispies – as above but substitute dinner for breakfast
Cheesey pasta – played with her hands but didn’t taste 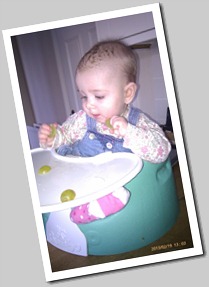 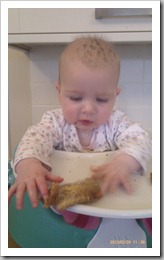 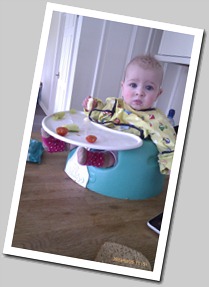 I keep making food for Callum but his meal time will coincide with her nap time so she doesn’t get to try anything.

Mostly, anything that she gets in her mouth is either just gummed or spat back out but there was a tiny shred of evidence in her nappy this morning (the joys of studying baby poo!!!!) in the form of tiny black wormlike fibres (they didn’t wiggle!), most likely to be the banana.

Along with the food, I’ve tried to introduce water in a shot glass. I still hold it for her at the moment as her co-ordination is still quite wild but she asks for it and I let her control her head and mouth towards the glass, just tipped enough so she can get to the water. I’ve Callum’s old doidy cup at the ready. As soon as I see she her dexterity improving, I’ll be giving her free reign with the doidy cup.