I’m going to start with Callum as I’m just so excited to tell you about his swimming. I’m so very proud of him. He is moving up from Pre-School Level 2 swimming to Pre-School Level 3. He has got a certificate and his very first swimming badge! 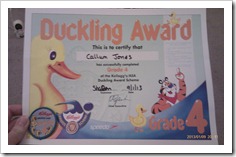 To achieve this award, Callum had to be able to do the following:

To many this may not be anything special but to me it’s amazing.

My own memories of swimming lessons at school (age 7-11) were messing around playing ‘don’t touch the floor or the crocodiles will get you’; dodgy pink flowery (granny) swimming hats if you made the mistake of forgetting yours; and cheating for my 50 meter badge by walking on the bottom of the pool then splashing my leg up every once in a while. There was also the occasional visit to our local leisure centre on a Sunday with my parents where my dad tried to teach me to dive, starting with the pixie dive. I regret not putting more into my swimming as I’m really not a very strong swimmer and I don’t have a great deal of confidence. I can hold my own in the pool but my front crawl resembles a shark attack and the most lengths of a pool (which was about half the size of an olympic pool) I’ve managed is 24 and I was extremely proud of myself!!!

To put it into context as to what this certificate actually means to Callum’s swimming ability – he is a long way off being able to swim confidently without buoyancy aids, though he can do about 2-3 meters on his own but he has so much confidence in the water and I hope that in turn will be a benefit to his confidence overall when he starts school, being as he is usually show shy and intimidated in big groups of people.

Basically, she is still gorgeous! She hasn’t rolled much more, from front to back (finding the right time when she isn’t going to puke just after a bottle but still has enough energy before naptime is a challenge!) and she hasn’t mastered back to front yet but she is often really close. She loves her feet which hold her attention much longer than any toy. Her grab & hold is also improving.

But better than all of this is that we have had a couple of sleep throughs – well from about 10.30pm until 7am or 11.30pm until 7am or 6.30pm until 4.30am (although there was a dummy replacement). Its all definitely moving back in the right direction. We actually had about 4 consecutive nights of what I would call a sleep through (admittedly not 7-7 but where I got some good solid sleep) then she went back to waking every 4 hours again which was a killer. Having given me a taste of what she could do, she then took it away. But I put this down to her experimenting with how much milk she needed during the day to get through the night. At the same time as she was sleeping through, she naturally started going 4 hours between feeds during the day and started consuming more milk at each feed but then she reverted back to feeding every 3 hours. Then, the 2 previous nights (excluding last night) she had much better nights again with the 11.30pm to 7am being the night before last. Unfortunately, last night we were at a family party and stayed at a hotel so her sleep was all over the place but that’s the first time away from home since she has been out of the moses basket. She had to spend a large part of the night in her buggy in the corner of a room where there was (loudish) live singing taking place – in fact she was awake for 2 hours just staring around the inside of her buggy but she didn’t complain and didn’t want milk. Eventually when she just wasn’t going to sleep, I took her out for a little dance and for the relatives to all coo over her before putting her back in the pushchair at the end of the night just before we were leaving when she went straight back off to sleep! When we got back to the hotel, she didn’t settle well straight away and then woke after 4 hours. Hopefully, though, this was all down to the new environment and tonight will be much better again.