A couple of weeks ago was Callum's birthday & we had intended to go to a local nature park nearby called Moors Valley as they have a Gruffalo trail for kids during the summer months that is due to finish at the end of September. I had read a review of the activity on fellow blogger, Kara Guppy's Chelsea Mamma blog and it sounded perfect for callum.

Unfortunately, in true British weather style, we had to change our plans as, despite weather being good leading up to his birthday and was sunny again the next day, it chucked it down all morning in the actual day!

However, I was still keen to take Callum there so, with a nice day forecast for Saturday 15 September and nothing already planned we decided to go check it out and we took my 6 year old niece, Sofia, along too.

It was £2 for a card containing answer spaces for 20 questions (well 19, the last one was an instruction to return to the visitor centre to check your answers). The trail was about a mile long through the Moors Valley woods and along the way were logs containing questions or activities. Some referenced the book directly, some were questions relating to the animal characters from the book (I.e. which of the animals hibernate?) and others required you to complete an activity such as look for pine cones eaten by a particular animal or move like one of the characters in a follow my leader game. The questions were engaging and inclusive enough for both Callum at 4 years old and my niece at 6. The questions were spaced at a good distance where you could usually see the next question from the last. This provided enough excitement and continuity for little ones to remain engaged pulling them forward to the next question without getting bored. I imagine if they were too far apart they would have lost interest. 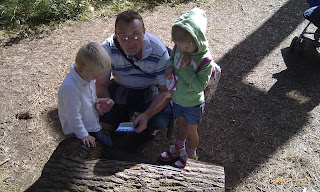 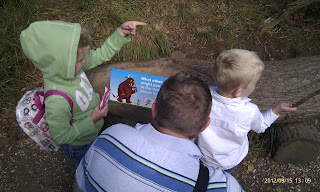 I think the Gruffalo went that way! 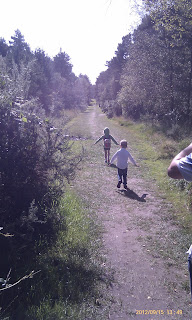 The questions themselves were aimed at probably my niece's age though im sure some children Callum's age would be able to answer some of the questions and there were a couple that even Stuart and I had to think about! I had forgotten to read up on the book before going as was advised by Chelseamamma, but thankfully, although it would have helped for a couple of questions, it wasn't necessary for them all.

It did help that it was a gorgeous sunny day, not too hot and not too cold but even if it had been a bit overcast, the path it took through the Forrest would have still been enjoyable. Callum and Sofia had great fun running to find the next question and Stuart and I found it a pleasurable walk in the September sun. Millie slept through the majority of it but was rather fascinated by the trees when she did wake up. It was a pushchair friendly path too. We have a maclaren and, although bumpy over a few tree roots, it was easy enough to navigate round. 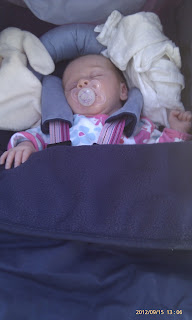 All this walking is hard work!

We didn't do too bad either with the quiz, considering we didn't cheat by looking up the answers on our phone. Just the one question wrong! Well done us.

The walk itself took us just under 2 hours which included a stop near the end so I could feed Millie.

We finished our day with a run around in the park - well Millie & I sat and watched the others run around - before we headed home. A good day had by all. 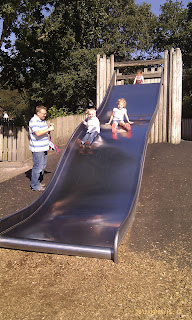 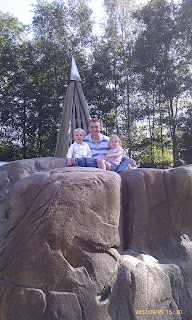