Shortly after Louise, my second midwife Pawla arrived. I got the impression Pawla was the senior midwife and Louise the junior but both very capable and very lovely – I like lovely! Looking in my notes, I can confirm it says ST M next to Louise’s name so suggests that she was a student. She was very confident, I just thought she was newly qualified.

Firstly, I was hooked up to the monitors and my BP checked. BP was fine and, apart from the monitor being a pain not picking up enough of the heartbeat unless permanently held and then baby being mischievous kicking or moving away from the monitor, they managed keep track and everything was calm. At one point she suggested I might like to lay on my side – anything to get off my back! One thing I didn’t want was to be on my back, my labour pains were in my back so it was making them hurt more and I knew it was the worst position to be in. So, when she suggested this I jumped (well more of a slow painful shuffle) at the chance but when I went on my side, baby’s heart rate slowed so I had to turn back. Thankfully, it returned to normal when I went back so she just didn’t want to be on that side. I found this strange as that was the position I always found most comfy when laying down or sleeping.

I had originally said, and it was in my notes, that I had wanted to try the pool. I had also mentioned this when I rang the hospital from home but at no point was this mentioned. Admittedly, I didn’t bring it up either but assume it was because baby needed to be monitored and they wouldn’t have been able to do so if I was in the pool. Perhaps I still should have asked.

They examined me at 8.15am. I was 4-4.5cm dilated. I was mildly disappointed to not be further at this stage but pleased I was far enough along that I didn’t have to go for any walks considering I ‘faked’ my panting! Stuart was still recording my contractions at this point and they were now every 2 minutes and lasting over a minute.

From here it all gets a bit blurry. Contractions started to come thick and fast and they kept commenting how I wasn’t getting much break from them. Everytime I moved, it would also trigger another contraction. They kept trying to get me to have some gas & air but as it was I was keeping the sick bowl to hand and the last thing I wanted near me was something that was only going to make me feel more sick and not even for the benefit of taking the pain away.

Then they tried to get me to have pethidine because I was tensing up through each contraction. They said it would help to relax me. Pethidine was the one thing I said on my birth plan that I didn’t want as I was concerned about what got through to baby and baby being sleepy when born. The fact it can have an effect on feeding was also a reason too. I said as such but they said the number of babies that experienced this was so low and not something they had ever seen. Personally, I was worried about feeling out of control. I asked Stuart what he thought as I was having his baby too – he had a say in what drugs I took if they affected his baby. He left it up to me. In the end I gave in. Ouch, did the injection sting – it was in the thigh. It must’ve been ouchy to notice the pain even when in labour! They said it took about 15 minutes to take affect. In the meantime, I remember trying to relax more for each contraction hoping it would help – sometimes it did, sometimes it didn’t. I would shake my head from side to side and close my eyes to get through each contraction. I waited and waited for the pethidine to take affect then started to ask, when does the pain go away? “It doesn’t take the pain away” they then said….What? Hang on?  You convinced me to take a drug I didn’t want and it wont even take the pain away!!!! “It relaxes you and takes you away so you can deal with the pain better but the pain doesn’t go away!” Nooooooooooooo! Shortly after, I was begging for an epidural “Please make it stop, please take the pain away, please can I have an epidural”. They agreed I could have an epidural and said they would go and get the card thing for me to look at but they suspected I may even be ready to push and therefore it be too late. They wanted to examine me first. They asked if I felt the urge to push and I had to confess that I was getting it, yes.

Sometime around this point the room filled with doctors. I’ve no idea what they were doing there, I think they may have asked me questions I can’t remember. From my memory, I think there were about 6 extra people in the room but I really can’t be sure. It is all a bit of a blur and I have since asked Stuart and he isn’t sure either. He said they either came in because I wanted an epidural or because they were just doing the rounds.

Anyway, the MWs examined me! It was hell! Every time she felt a particular area, I had a really intense contraction. However, she confirmed, yes, I was fully dilated, it was now time to push and yes, definitely too late for an epidural – I was doing this the painful way, all the way!

I requested to go on all fours, I just needed to get off my back and as on my side wasn’t allowed (as it distressed baby) which was the best position for me with Callum, I asked to try all fours. They agreed and instantly, there was relief in my back. Clearly I was still in a lot of pain but it made the next bit more manageable otherwise I’m not sure I would have got through it (clearly I would’ve but that’s how I felt at the precise time). I felt my body pushing and there was very little I could do about it. According to my notes I started pushing at 9.20am. After a couple of pushes, they told me to pant and pant I did. I think it took a couple of contractions of panting for the head to come out and then another for the body. Again, instant relief. My head cleared, I caught my breath and I felt like a knew woman! Sort of!

I noticed she wasn’t crying instantly but I wasn’t worried. I could hear them talking to the baby in calm voices and welcoming her to the world so felt confident she was ok and pretty soon she let out a wail. My notes confirmed she had a little tactile stimulation before she cried. Apparently, she did have the cord around her neck but looped around the back not the front but it may have been this that was causing her heart rate to dip and perhaps she was compressing it when on my side.

I had requested that she be cleaned before being given to me for skin to skin, which they did and I was presented with my beautiful baby girl, Millie May born at 9.31am on Monday 20 July, weighing (which they did a little later) a perfect 7lb 11oz (or 3.48 kg). And she is absolutely perfect.

We were given some bonding tine for a while when Stuart also had some skin to skin time. We tried to breastfeed and it took a little while and a little help from the midwife but eventually she fed and for a good 20 minutes. During this time they bought me some tea and toast and Stuart and I scoffed jaffa cakes from my little used labouring hospital bag!

I was then allowed to shower and discharged straight from the delivery room a little around 12 so home in time for lunch! As we pulled up outside the house, ready to surprise my mum that we were home already, I joked that it was like we had just popped out to the shops to get a baby! I am sure that is what Callum thought too when we introduced him to his new baby sister!

Congratulations to ChelseaMamma for guessing  the correct date, Kilburina for correct weight and I get closest time! 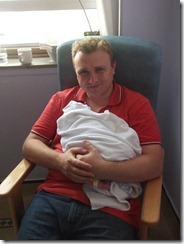 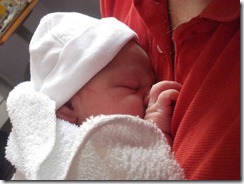 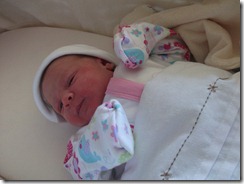 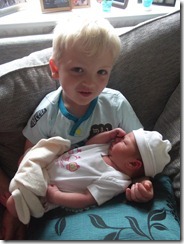