So, just back a week from our holiday and time to update you all.

Last year: Albufeira = so-so place, Callum was hard work, we were not relaxed.

So, so much better than last year!

After last year's nightmare from the word go with Callum (to briefly fill you in, we got him up early, he didn't sleep in taxi like he was meant to and we were the family you didn't want to sit near on the plane!!! He was then hard work for the rest of the holiday), this year was the reverse. We decided to stay in a hotel near the airport this time because we had another early start. We still had to get up about 5am but it was still better than the time we would have had to get up if travelling up from Bournemouth. So, our holiday started on the Saturday.

I wont bore you with the nitty gritty detail as this post is going to be long enough anyway but to skip to bed time...picture this...

9pm (already way past Callum's bedtime) we put Callum to bed, watch a bit of tv ourselves then turn the lights off around 9.30pm.

Callum then starts singing loudly (badly and no particular recognisable tune) - eventually, Stuart and I both tell him to "shut up and go to sleep"...next thing, we are both drifting off to sleep finally when we hear "Love you Daddy"...so lovely to hear, bless him, but GO TO SLEEP!!!!

So, when we wake up in the morning, Callum was more than happy to get up and was ready and raring to go. Already a good start!

We get to the airport and things start to go a bit...erm (my favourite word)...challenging (that's my favourite word, not 'erm'....well not challenging either really as there are plenty of nicer words before the word 'challenging'...oh, I'll shut up now, you get what I mean...I hope).

We get through check in easily enough and then Callum wants to go to the toilet so Stuart waves in the direction of the toilet as I go to put the trolley back and retrieve our pound coin thing. I then follow the signs to the toilet. After waiting for about 10 minutes I'm thinking this must be a bloody big poo...they are still not out. After being advised to join the queue for security a number of times, I check my phone - several miss calls from Stuart and a text asking where I am. I call him and he is a different toilets, the ones that were right in front of the check in desk that I completely missed and has been waiting for me for ages. No major drama but still meant we wasted valuable breakfast time! We get instructed to join the 'assisted' queue which, because it is full of families with pushchairs, takes twice as long as the normal queue despite being half the size. More valuable breakfast time wasted. We finally make it through security and head to the food court. We sit down at a table and take ages to be served. By this time, we look at the time and realise unless we get served our food in next 5 minutes, we are going to be late heading to the departure lounge so excuse ourselves and head somewhere else where we can grab a bacon bap on the go. We go to pay and Stuart's card is refused. Rather embarrassing so we try mine, and again it is refused...both of them (same bank). A slight panic as we know there was money in the account and the bank wont be open until the next morning. Stuart runs to a cash point and luckily doesn't have any problem getting money out and nothing is amiss, it was just the companies machine having a problem reading our cards for some bizarre reason.

By the time this has all happened we have to rush to the departure lounge - no time to chill, no time to shop....thankfully, though, after that our luck turned a corner!

The flight went well and only need to open the bag of tricks I'd prepared for Callum for in case he got fidgety about two thirds into the flight. It was a great idea and did the job. It contained a couple of new books (Mr Man & Thomas), new pencils, pencil case, sharpener, colouring book, lego, new car and another toy car thing...think that was it. Would definitely do it again but next time I'd remember the return journey too.

The apartment and complex were great. It was pretty big for a self-catering apartment and had the novelty (for us) of a separate sleeping area to the living area. When we first walked in we were concerned because there was a cot in there and remembered when Stuart booked it he'd intended to book it for the previous year when Callum was still in a cot so we were worried there was no where else for him to sleep. Luckily, however, the sofa in the living area converted into a sofa bed with a pull out bed underneath and the bedroom was plenty big enough for us to put the bed in there for Callum. It worked brilliantly. We also had a big double balcony that overlooked the pool and also, if you looked closely, you could see the sea. 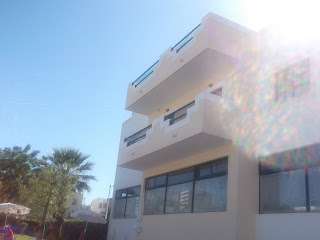 Our balcony was the first floor one 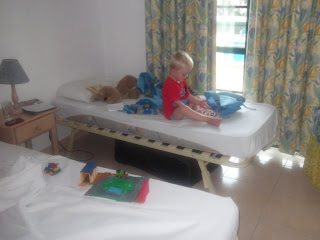 Callum's bed with his bag of tricks 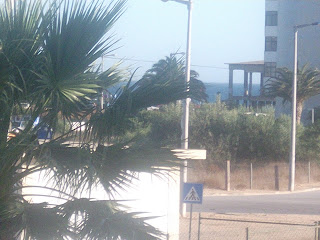 A zoom in on the sea view from our balcony
The location of the complex was ideal too. On the edge of the town with a short 10 minute walk to the harbour or beach. Alvor was lovely, with a great character and plenty of restaurants to choose from.
Last year, the plan was often to either get Callum to sleep before we went out for dinner or to all have dinner together and to get him to sleep in his pushchair after. That was often a 'challenging' task! So this year, as Callum was a year older, we had agreed that we'd just let him stay up until he was ready to sleep and play it by ear. Rather typically, a number of times (certainly at the beginning of the week), he wanted to go to sleep in his pushchair after dinner. Although, after he met a couple of little boys to play with, he did then stay up and play.
Callum loved the pool and, when we stayed poolside during the day, he was rarely out of it. We went to the beach a couple of times but the sea was a little too powerful for him. He did go in a bit a couple of times but wasn't keen. He was more than happy to play in the sand though and help me look for shells. 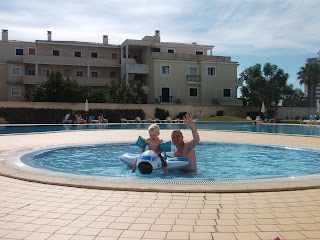 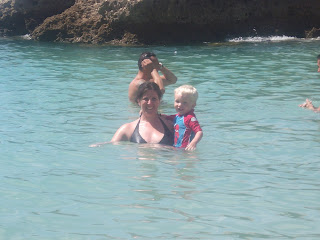 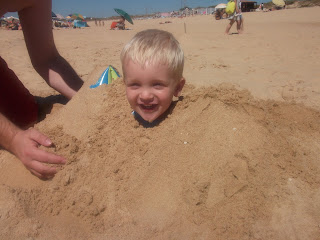 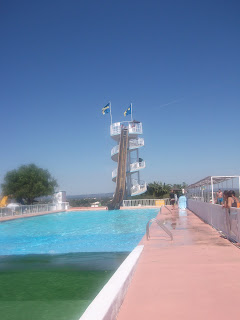 One day we headed to a waterpark, Aqualand. We went to
Slide & Splash last year so wanted to do a different one this year. We chose this one as we were told about a new children's slide area that had just opened but were disappointed to see it was closed without an explanation when we got there. I think Callum still enjoyed himself though, despite Stuart taking him kicking and screaming on one big slide (he did feel very guilty afterwards).
At the beginning of the week we went on a boat trip one afternoon. It was a proper traditional old working sailing boat (modernised with an added engine for days when there was no wind...like when we went). We sailed to Lagos where we anchored up and had a chance of a dip. I wimped out, regrettably, because I was too chicken that it would be too cold. Stuart went in though and you could see Callum wanted to go in. We put a life vest on him and I thought that would be sufficient but when Stuart took him down the ladder he wasn't very confident with the life jacket and it didn't provide enough bouyancy for Stuart to let go of the boat. So we took Callum back up and when he still looked like he wanted to go back in we put his arm bands on as well as the life jacket. We tried to get him to jump in but he was too nervous and time was running out so Stuart climbed up to get him and jumped back in with him. Unfortunately, Callum wasn't too sure of that and so didn't really enjoy the water or stay in for long. As Stuart said afterwards that he probably would have been fine if we had put his arm bands on the first time or if we had more time...or even if I had the courage to jump in! 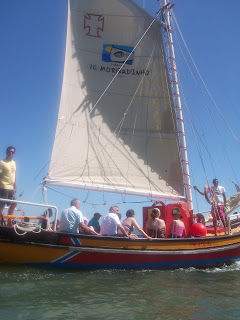 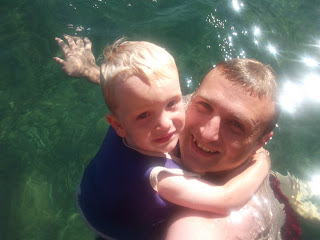 What I really enjoyed about the boat trip is that the guys sailing the boat dived in and bought some 'sea monsters' up with them - I got to hold a star fish, a sea-urchin and a sea-cucumber :-D Callum got to hold a sea-cumber. Definitely a highlight of the whole holiday for me.
To sum up the whole holiday, we all had fun, we ate well and Stuart and I even managed to relax too. Alvor was lovely and I would recommend it and would be happy to go back there again.
...and I haven't even mentioned the weather - hot and sunny!
Take me back please, I'm missing a pint of pimms on the beach!!!! 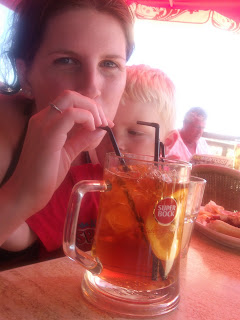 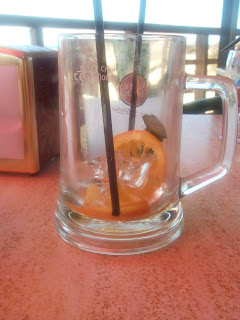