M is for Millie…and Mischief

Maybe as time has past, my memory has blurred. We do tend to pick out the bits we like or are more eventful in life. However, how I remember Callum is that he rarely had the aspiration to get up to too much mischief.

We had a cat yet only twice did he show an interest with playing sandcastles with the cat litter and never showed any desire to eat cat food or squidge it between his fingers. If we nipped to the loo, we could leave him playing safe in the knowledge he would highly likely be exactly where we left him when we returned. There was a period where he found it much fun to pull out all the CDs in the CD rack about 100 times a day but I do not recall any other relentless mischief!

Then along came Millie!

Don’t be fooled by that butter wouldn’t melt cheeky smile! 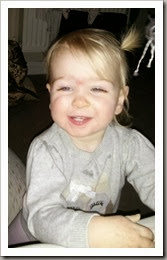 From before she could move we could tell that knowing look in her eye that as soon as she would learn to crawl she would be into EVERYTHING! And she was, except she became a bottom shuffler rather than a crawler. It was a wonder it took her so long to bottom shuffle with her insatiable curiosity!

Callum quite quickly grew out of the insistent throwing of food on the floor but no, Millie still finds it fascinating to see the reaction (even when I’m determined not to give her one) of throwing food, cutlery, plastic bowls, not so plastic bowls…oooh look, they don’t bounce!

Also, I never knew how fascinating it could be to see what happens when you tip bottles and cups upside down. You may not quite notice the first time, or the second, or even the third, fourth or fifth for that matter. In fact, maybe you should try it fifty times and you get an even better reaction if you pour it over your Daddy’s head.

It’s so lovely that she likes to draw and colour so much. Callum was never interested in colouring really, only getting into it in the last year. She has mastered the tripod grip on a pencil, I was so proud…until she decided to decorate the carpet, the toilet seat, the bedside table, the dressing table stool, the door…need I go on! And the continuous temptation of Callum’s felt tip pens is too great – queue big tantrums dare we deny her!

The latest game is seeing what happens when the dry cat food is thrown into the water bowl!

And the most infuriating thing is, you just can’t be cross! We’ve tried! Many a time! But she just looks and laughs and pulls the most adorable faces and your eyebrows start to quiver, your cheek twitches then before you know it you are hiding a giggle behind your hand!

She is relentless, exhausting, infuriating, but goddamn bloody cute and adorable too! Rah!