Saturday, at exactly 11 months, Millie had her Naming Ceremony.

We had a naming ceremony for Callum too but we lived in Godalming then. We hired an area of our local pub which had a lovely garden which we hoped we’d be able to use if the weather was nice but unfortunately the weather was a bit unpredictable so we actually held it inside. It was a nice pub and they provided a light tea for after the ceremony (or people could buy their own meals if hungry). We set ourselves a budget of £250. £170 for the Humanist Celebrant (which was the going rate at that time) and then the rest for food. The venue hire was free and we agreed with the pub that they would provide tea for half the number of guests to keep the costs down. 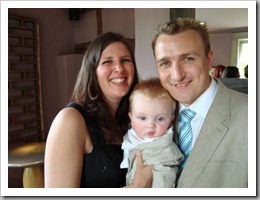 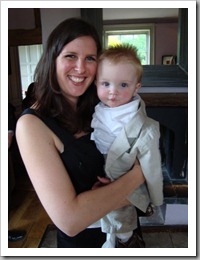 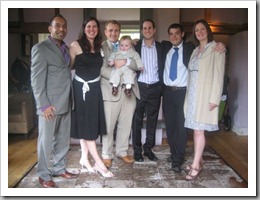 For Millie, we hoped to get a similar venue to what we had for Callum’s – a nice pub that may have a hire cost but provided the food for free or had free hire and we paid for food. Much research later, it was evident that this option wasn’t going to be possible. We looked into venues like AFC Bournemouth Football stadium, Goldsands and also a couple of hotels nearby but once you calculated the costs it wasn’t going to be cheap.

The first thing we did, before any venue deciding or invitation sending or even decide on a date, was find a Humanist Celebrant. It would’ve been nice to have the same person who performed Callum’s but the Celebrants tend to work in specific areas/counties unless you pay for their travel on top. We weren’t precious about having the same person so I searched the local area and contacted Brenda Harris. But that was nearly a bit of a palaver. Not the initial contact but trying to arrange the face to face meeting. Brenda was going on an extended holiday of about 4 weeks and she would get back the day before we were due to go on our own 2 week holiday meaning it would be mighty close to the actual naming day before we got to meet. Thankfully, as it turned out, we pushed our holiday back a week later so we met the week in between our respective holidays. Brenda also rather kindly went against usual practices and forwarded an information gathering document for us to complete while she was away so that it wasn’t all left to the last minute if we didn’t get to meet until the end of June and so she could start writing the ceremony while we were away.

The Humanist Celebrant was now £200 instead of £170. Stuart’s parents very generously offered to gift us some money towards the ceremony so that paid for the Celebrant. As we weren’t going to find a venue that provided either the hire free or the food, we decided we had to up our budget to a total of £400 (including the Celebrant) which left us with £200. No venue was coming in at £200 or less so we had this grand idea of hosting it at our house, in the garden. We would then spend the £200 on catering/food. It wasn’t until a couple of months after sending the invites that it dawned on us! Drink! The guests were going to expect drink! We hadn’t put ‘bring a bottle’ on the invites so they would probably expect us to provide it. If we had gone for a venue, the guests would have bought their own drinks. Doh! Budget now completely blown to (up) Uranus and back!

We invited 50+ guests (incl. children) and most of them accepted. That was another ‘bright idea’ that resulted in inflated cost! I thought, hey I’ll save some money and make the invitations myself! Hmmm! I was warned that if I went to Hobbycraft, I would spend twice what I intended and come out with things I never new I needed. Well, it wasn’t quite that bad but lets just say it would have definitely been cheaper to have bought them or even have had one of those online card/photo companies make them.

Then there’s the slight issue that I am not as ‘crafty’ as I think I am in my head. In my head I have such talent and creative flair but when I try to put pen to paper (or glue & glitter to card) it seems to seep out of my pores until by the time it reaches my hands I have the talent of a 6 year old! I opted for the ‘keep each one unique’ approach. No one card was the same! (that’s my story & I’m sticking to it!) 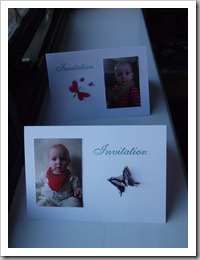 We looked up a few options regarding food/catering: Hog Roast; Paella; M&S Catering; Sainsbury’s Catering; but finally decided to go for Hog Roast take-away (with server) but only made the final decision less than 2 weeks before the day. Having looked further into the M&S Catering or Sainsbury’s catering, we really weren’t going to get much for our money and it would require someone to go and pick it up straight after the ceremony (someone who wasn’t drinking). So we enquired whether a local Hog Roast caterer had any availability, fully expecting them to say no being prime wedding season! Thankfully, they had a space but we still ummed and ahhhed before we finally went ahead as it was still going to blow the £200 (again!). 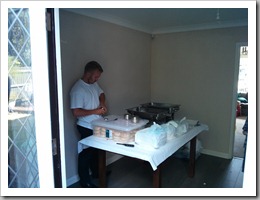 With just one weekend free before the ceremony, we then looked at our very weathered decking and realised we were going to have to stain it before the day. Stuart was away the weekend so that was left to me but with 2 kiddies running about, the only sensible time to do it would be after they had gone to bed. Thank heavens for clear, dry and light summer evenings. It took me about 3 nights to complete (over 2 hours each night) but it looked a thousand times better and was definitely the right move! I also tidied up a the garden a bit on that weekend before the event. 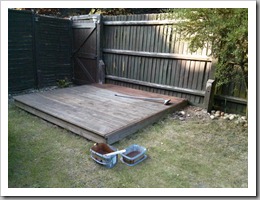 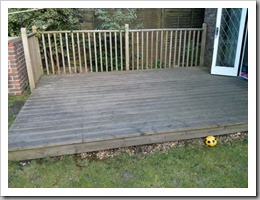 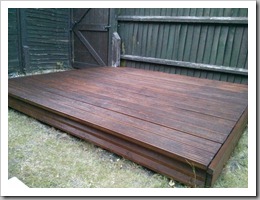 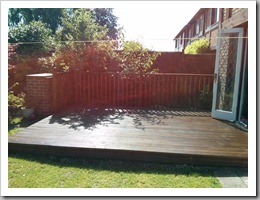 The week leading up to the day, aside from staining the decking, I felt like I was running here there and everywhere, looking for outfits for Millie and I (I stuck with and old one in the end) and buying last minute bits. The credit card was red hot! Thankfully, Stuart did most of the booze shop but there were a few things we had forgotten like Cava for the toast. I finally found a suitable dress to buy Millie the day before the ceremony – well I actually saw it when I looked earlier in the week but wasn’t sure about it then when I went back to Monsoon, it was the first dress that caught my eye and practically jumped off the rail for me to buy it and I’m so pleased I did. She looked beautiful in it! 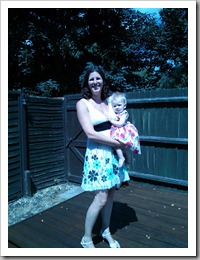 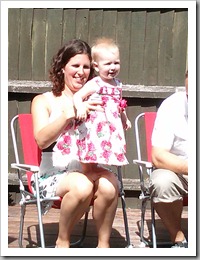 So, to read our ‘planning’ you could say it was a bit hectic, disorganised and I was a tad stressed by the time the day arrived but to see if it was all worth it, read the next post about the actual ceremony and reception and think of this post as ‘how not to arrange a Naming Day!’