When Callum was 20 months old, I thought I would surprise Stuart and I took us all camping. In secret, I booked the pitch at a campsite on the Kent-Sussex border, packed the tent and all the gear into the back of the car and instructed Stuart to come home early from work on the Friday of the May Day Bank Holiday and off we went to Romney.

I was so excited.

However, it was pretty much a disaster. We arrived after Callum’s bedtime, it took me an hour to boil pasta for our dinner due to the cold and wind, it rained most of the time, the nights were freezing, Callum refused to sleep between us on the blow up (plus there wasn’t really enough room) and Stuart vowed never to take a child camping again and definitely never to go camping in May! 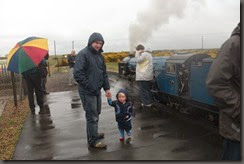 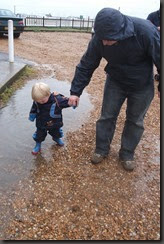 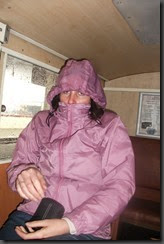 I was a little less deterred and chalked it down as a learning experience. That said, I was in less of a hurry to repeat the experience with Millie.

Yet, along came May just after Millie turned 21 months and Stuart and I found ourselves in a camping shop looking at tents and planning a May bank-holiday camping trip!

But this time was going to be different!

We were actually planning the camping trip for a week in August but were keen to purchase this new style of tent which you inflate instead of using poles which means it can be put up in a matter of minutes and by one person. We were also going Super-size! Our memory of our previous camping trip with Callum not entirely forgotten, we figured it’d be a good idea to take the tent for a tester trip for a weekend close to home.

We decided on the, potential to be slightly warmer, Whitsun bank-holiday and we headed less than 30 miles away to a town near Swanage called Langton Matravers. We took the ferry so we could pretend it was like a ‘proper’ holiday in a different country and not just down the road in the same county!

Due to me being out on the Friday night, we also left it until the Saturday morning to go so there were no over-tired and over-excited children waiting for their tea and not going to sleep!

We were still nervous as the weather was ‘iffy’ and this was to be the first time Millie would be sleeping in a ready-bed.

We arrived at the basic but clean Acton Field Campsite. It already looked busy and we struggled to find a pitch big and flat enough for our huge new 8 man tent that was the required 6 meters away from neighbouring tents but we finally settled on somewhere which had an amazing view too. 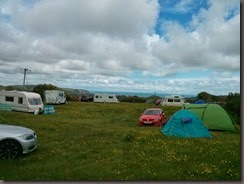 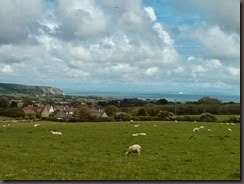 The weather was holding (despite the torrential downpour that was flooding our back garden earlier that morning) and after shopping for some supplies I managed to cook a dinner of rice and chicken curry in 30 minutes and just before the rains returned. 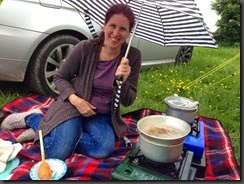 Come bed time, Millie was asleep in record time whereas the excitement for Callum was making him want the wee every 5 minutes, resulting in several trips to the loos in the pouring rain. By this time it was amazing how busy the campsite had got. Our previously dismissed pitches which we had considered too bumpy were now home for campers and tents of all shapes and sizes and many were still arriving or having to leave due to lack of space and tents were being erected in the pouring rain.

It was a very cold night and Callum woke the once then being the first to wake at 6am who woke his sister shortly after as he had to get the wipes from her room (yes she had her own room – they both did!). I hadn’t slept well at all due to the cold and the slope causing me to roll into Stuart until he got fed up and I perched on the edge of the mattress using all my muscles to stay put. Every muscle ached by morning! We didn’t hear a peep from Millie. 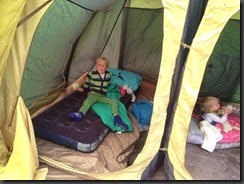 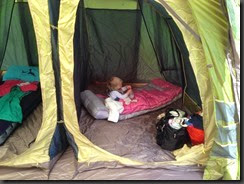 The Sunday was much better weather and we had an enjoyable day at nearby Putlake Adventure Farm. 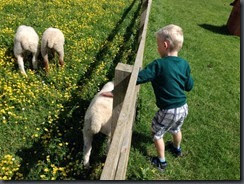 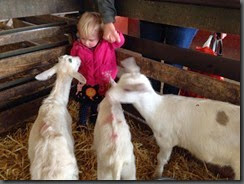 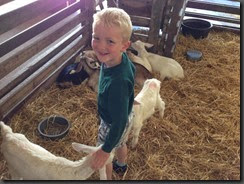 That evening, we attempted a bbq with a disposable I had bought ‘just in case’ the previous year but the absence of matches and the old bbq meant that weren’t gonna happen (even after borrowing a lighter from a neighbour) so it was fried burgers and sausages instead and an enjoyable chill out with a glass of vino as the sun went down.

Callum had made a friend with an older girl (check him out!) in a nearby caravan and I was reminded of my own childhood enjoying the freedom and friends that camping and caravanning promoted.

As a nice surprise, friends of ours had also pitched up at the same campsite with their camper van so we enjoyed a tipple or two with them before settling in for our night 2. Millie hadn’t gone to sleep quite so easily that night and when we thought she had gone quiet some time later, discovered she had instead decided to investigate her travel bag and discovered the face softening powers of sudocreme (or she thought Christmas had come early, it is hard to say!) 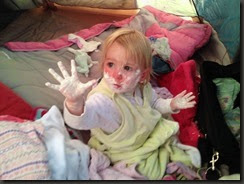 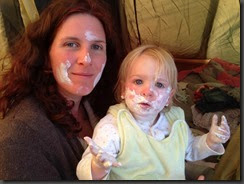 Well if you can’t beat them, join them eh?

She did eventually drift off and they both slept to a respectable 7.30am for what was a much warmer night.

Monday meant time for home so we packed up the tent which, after the joys of being a one man job to put up, proved to be a more involved and challenging job to put down and squeeze back into the bag from which it came.

We joined our friends for a pasty and pint over at The Star and Compass in nearby Worth Matravers before making our way back home after, what we considered a much more successful camping trip though still came away with lessons learnt for next time. But confident there would still be a next time…in August! 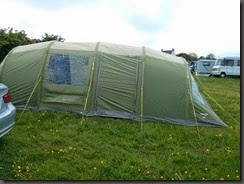 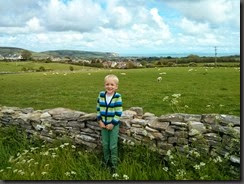 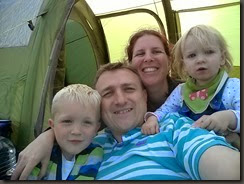 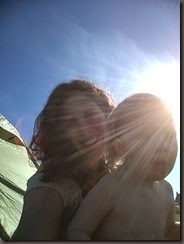