I’m a little late in writing this post as I wanted to write it on 1 June. Why? Because then Millie would have been outside in the real world for exactly the same length of time as she was inside my tummy growing. I thought it would be a perfect opportunity to provide an update on my beautiful girl! 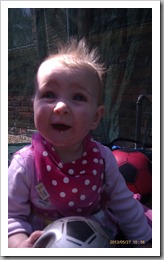 Still not much actual moving happening at the moment except in circles. If you lie her on her back, she finds it hysterical to roll straight to her front. Which is great! Except when she is in her cot and is meant to be sleeping or in her sleep as she then gets stuck and cries for help.

She isn’t crawling or bum shuffling forwards yet…or backwards…but she has mastered doing the 360 degree bum shuffle. She’ll sit amongst her toys and start rotating around as if she is sat on a Lazy Susan picking things up and putting them down again as she gets to the next toy of interest.

She is itching to walk and to be able to pull herself to her feet. If there is anything in grabbing distance she grabs on and starts pulling. It is definitely time to drop the base of the cot to the next level! If you hold her hands while she is sat down she pulls herself to standing, or if you try to sit her on the floor she refuses and stiffens her legs to stand, then just starts marching her little wobbly legs and grinning from ear to ear! If she wants a cuddle she tries to walk up my legs!

Millie is doing so well with her eating. We haven’t officially dropped any bottles yet but think we are in the process of doing so. She is eating (or drinking, always think eating milk sounds weird) less of her milk and doesn’t ask for her milk as readily around her typical 3 hour slot. I would say she is actually eating at least one meal a day if not two, in total. Some days that may incorporate snacks but not always. This week she is particularly interested in protein by way of fish or meat. What were her favourite foods at the start, such as red pepper, are of little interest to her now, but she is still keen to try new foods. I finally managed (remembered) to purchase some low salt & low sugar baked beans the other day and she couldn’t get enough of them.

She is consistently sleeping through the night now. There is the occasional 5am wake up, like this morning, but she is generally waking up between 6 and 6.30am. Even when she wakes at 5am she tends to go back to sleep again.

Her nap times are usually (there is no real always with Millie, as is the same for most babies I imagine) around 8.30-9am for about an hour and then we have an early lunch about 11.30 then after that she will nap for about 1.5 hours.

Millie has 2 teeth and I’m certain there are a couple more on the way.

I think she might be learning to wave…it’s early days so not sure if it’s just co-incidence yet or she is actually trying to wave.

Lots of lovely babbling noises, too many variations to document, but she likes trying out different sounds and volumes as the below video shows. The video itself, I believe, is her first realisation that the reflection she sees in the mirror is herself and not another Millie. I’ve been told I need to give a ‘Utter Cuteness’ warning before you watch. Ensure you have a baby, child or pet to squish, failing that, grab a teddy (everyone still has a teddy right?).

Although Millie has been a bit under the weather this week with a rotten cough (and those pesky teeth) she is still such a happy and contented baby. Unless you try to wipe her nose or give her calpol – she really doesn’t take kindly to anyone attempting either of those.

Callum is still wonderful with her though has started to slip into ‘typical brother’ mode by making her hit herself or goes charging her around the house when she is in her walker (the latter of which she loves).

Now for the next adventure – we are about to go away on holiday to Tunisia. Cases full of nappies, formula milk, wipes, bottles, toys, etc! How they think its fair to give a baby just 10kg for luggage is beyond me! Hoping Millie’s first holiday abroad will be more successful than Callum’s more testing one.