So, life since the birth...

Most of the first week was spent in the hospital. We had to stay in the hospital until Friday because Callum was early. I found this time invaluable despite not getting any sleep while there. The ward was too light for me to sleep, plus everyone else's babies kept you awake - that is when you weren't being woken up by your baby or the midwife to feed! The cheek of it! I did wasn't to go in a private room (despite the expense - £130 a night. Personally, I'd expect it to be similar to a 4* hotel for that price!). However, because they had closed the ward, they were using the private rooms for delivery rooms.

Anyway, despite this, I needed a lot of help and support for the breastfeeding. The first night he didn't feed so I had to give him formula to bring his blood sugar level up. The second day, I thought he was feeding but he was just holding onto my nipple but not sucking. The second night was horrid. I was up all night and he wouldn't latch on. I asked for some help and the midwives were really nice and supportive and spent lots of time with me but I still struggled and resigned myself to formula feeding - I was so tired and tearful. The next day, I told one of the midwives that I had decided to formula feed and she persuaded me to continue trying for that day with the help of the midwives and then, if by the end of the day I hadn't had any luck and I still wanted to go onto formula, I would. With help, I managed to feed that day so I thought I would try the night. I got help again throughout the night and was a lot more successful. Callum didn't like attaching to the right boob (the one with the more inverted nipple) so I expressed instead and the midwives fed him from a cup. I got upset again on the last day as I really needed help but I had to wait ages for the midwife to come and help me. Stuart was trying to help me and kept going up to the reception to see when she would come but this was stressing me out more so I kept breaking down and crying. Eventually, she did come and help. I was meant to go home the next day and I knew that this could depend on my success at breastfeeding.

That night (Thursday), I had help for the first feed and then managed the next two on my own, including managing to get Callum to latch onto my problem right nipple! I was so relieved and proud of myself.

When the midwife responsible for discharging me came round the next morning, she checked me out and said she was happy for me to leave but she said she had to come and see me feeding before discharging me. She saw me and she was happy but noticed Callum had some jaundice. She wanted the Paediatrician to see him before she let us go. This was about 9am in the morning. It wasn't until about 3pm that I was finally seen and allowed to go home. Stuart and I were going out of our mind.

The Paediatrician performed a heel prick test (where they take a sample of blood from his heel - he had had to have several of these for regular blood sugar level tests already - his poor heels were so bruised she struggled to find a clear spot) to check his level of jaundice. Thankfully, he was just under the limit where they would have to give him light treatment. Yay - we were given the all clear to go home :o)

We then had to wait ages again for the midwife to complete my notes and print everything off before I left. She finally gave me all my completed notes but I reminded her I was on medication for high blood pressure which I had been told I would need to continue taking once I had been sent home. She then had to go and check this out...so more waiting. Eventually, she found my prescription and finally discharged me.

We left so fast that it wasn't until I had got down to the hospital lobby that I realised I was still wearing my slippers!!!! Oh well, I didn't care anymore, and just went to the car in my slippers. As we left the car park with Callum strapped in his car seat in the back (looking very tiny), I really felt like someone was going to come running after us for stealing a baby!! It was such a strange feeling.

Thankfully, no one came chasing after us and we got home without incident - no flashing blue lights!!

Throughout the week, Stuart has been really helpful. He has been doing all the cooking and helping with jobs. He even put something on eBay that I've been waiting for him to do since February...and ventured into the garden to pick up half of the rotting apples that have fallen off the tree.

Lotte is slowly gaining confidence with Callum. The first few days she pretty much stayed outside, just coming in for meals. Now, she still looks at Callum with distrusting eyes but is brave enough to sit on Stuart's lap while I am sat next to him with Callum in my arms.

I have continued with the breastfeeding but now only feeding directly from my left boob and then expressing from my right. This has meant Stuart has been able to get involved with feeding and has been doing one of the night feeds.

Callum's sleep pattern has been erratic. We seem to have alternate good and bad nights. The night before last was a good night - Stuart feeding at 1pm with me finishing the feed as Callum was fussing. Then sleeping through until 5am, putting him down again at 5.30am. Then sleeping through to 8.45am. Last night was a bad night. Feeding at 2.30am but not going back down until 4.30 am, only to wake up at 5.30am, down at 6am, then up again at 7.30am. If only he wasn't s cute when he is awake, looking around with his little beady eyes - I can't help but forgive him for my sleep deprivation.

I have had 3 mw visits. The first being on the Saturday (day after getting home). She came right when I was breastfeeding and Stuart was out shopping. She was happy to see us relaxed (Stuart came home shortly after she arrived) with Stuart looking after me. When she was happy, she said the next mw would visit on Monday. This was Deana (sp?) who I had met before at the doctors. She weighed Callum and, due to an error in my notes, thought he had lost just short of the allowed 10% until Stuart noticed the mistake and corrected her. It turned out he had only lost 40g which is great. This meant that, despite only breastfeeding from the one side, he wasn't losing weight. Again, she was happy with our progress and said my next mw visit would be on the Friday. This was Claire - again I had met her at the surgery. She weighed Callum again and he had put on weight and was now more than his birth weight at 6lb 2oz (he had weighed 5lb 150z at birth). Great news. She gave me more advice for breastfeeding and said to make sure I was expressing my right boob for every other feed to ensure I kept making milk and to do so for one of the night feeds. She also cleared up a worry Stuart and I had regarding swaddling. We had been worried that, by swaddling him, he was overheating. Overheating could lead to Sudden Infant Death Syndrome (SIDS) so we obviously didn't want to risk this. However, he didn't sleep as well when he wasn't swaddled. She reassured us that it was fine to do so and to perhaps lessen his other layers (i.e. remove the sleepsuit and keep him in just a body suit and blanket). She advised us to check the back of his neck and, if it was clammy, he was too hot. This advice was a big relief. Claire then signed us off with a reminder to register Callum before 46 days were up.

Stuart and I have both had some 'fun' nappy changes. Callum likes to wait until your concentration is elsewhere (i.e. finding the nappy) and then weeing over himself. His trick with me is to wait until I'm preparing his nappy, thinking I have got away without any weeing incidents and then projectile pooing everywhere. In my haste to get a nappy to catch it and while my concentration is on trying to clean up the mess, he wees all over himself - very not funny!!!! I can sit there for ages with the nappy in place waiting for him to go for a wee or a poo but then, as soon as I risk replacing the old nappy with the new one, he picks his moment to go!!!

We have received some lovely presents from people. Lots of clothes and toys for Callum, flowers, chocolates and cooking books for me. Lots and lots of cards too. We have been thoroughly spoilt and I thank all our family and friends for the lovely cards and gifts.

One thing I would like to add is how surprisingly natural we have found the adjustment to parenthood. We have found an unexpected confidence with Callum which is missing when you are looking after or handling other people's children - even with my experience of babysitting etc.

I would also like to add that I fall in love with Callum a little more each day - every time I look at him, he makes me smile and proud to be his mummy. 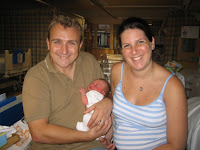 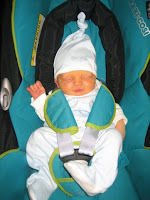 Ready to go home (looking tanned due to jaundice)